One of the great things about QLab is that its capabilities can be extended beyond those included in the program. For instance, QLab 3 only allows you to turn looping on or off for one Audio cue at a time, using the checkbox in the Time and Loops tab of the inspector. But what if you frequently have large numbers of cues you want to set to loop? It is possible to create a cue that will can perform this action on all the cues that are selected. In QLab 2, this could be done with a Script cue. In QLab 3 and later, now you can also use OSC (Open Sound Control) which can be a bit easier to set up. Once you’ve created these cues, you can assign hotkeys to them which makes them behave almost like built-in functions just like copy (⌘C) and paste (⌘V).

QLab 4 allows some cue parameters to be edited on multiple cues simultaneously, and looping is indeed one of them, but the hotkey method is still useful because it can be invoked at any time, and you don’t have to be looking at the correct tab of the inspector to use them.

You can use similar OSC cues on hotkeys to control a huge range of parameters in QLab. The OSC dictionary for QLab found in the QLab manual:

You can create hotkeys to invoke any OSC command in the dictionary; this example will focus on looping.

In QLab, OSC is often used to communicate with other pieces of equipment over a network, such as an ETC Ion or a Meyer Galaxy. But you can also send OSC messages from QLab to QLab itself. By default, QLab workspaces have OSC patch 1 set as a “loopback”, i.e the OSC is sent to the Mac QLab is running on, which has a special address, localhost, and to the port number which QLab listens for OSC on, port 53000. 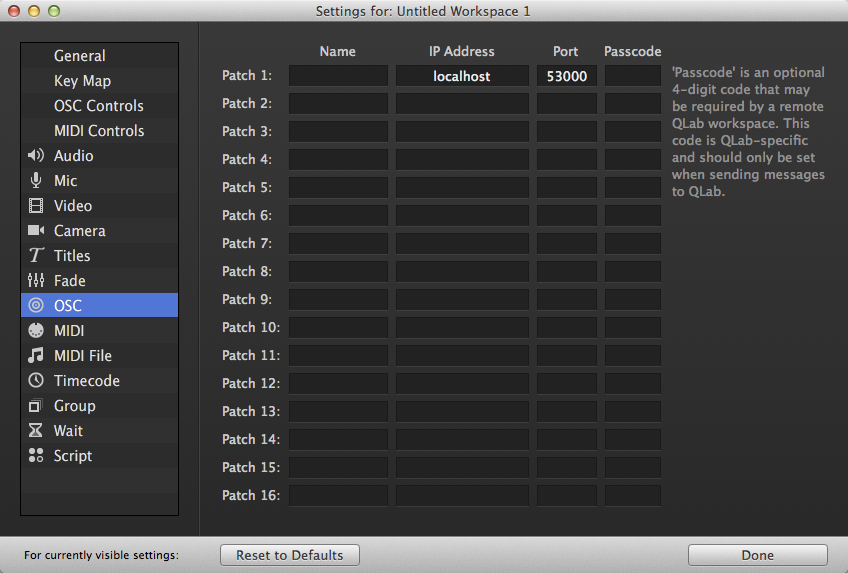 To set up a hotkey to set the selected cue to loop we would do the following:

IMPORTANT: OSC is case-sensitive, so you must enter OSC with the capital letters in the correct place. If you are typing an OSC string from memory then the general rule is, all letters are lower case except the first letter of any words that are joined to another without a space, like ‘infiniteLoop’ where only the ‘L’ is capitalized.

Here’s a screen shot of our OSC cue that will set the selected cues to loops: 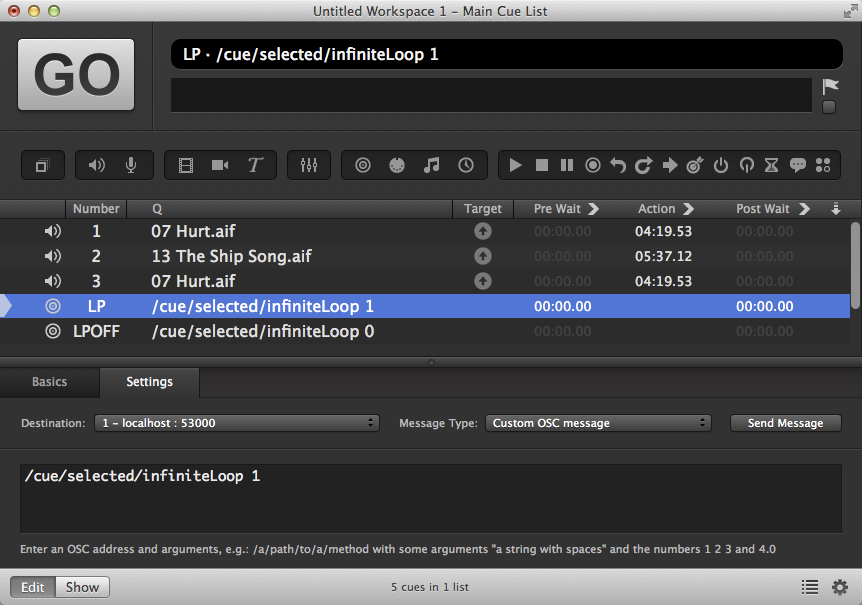 Of course, if we run this cue as it’s shown in the screen shot, nothing will happen, because the only cue selected is the OSC cue itself. So what we need to be able to do is trigger the OSC cue while we have a bunch of other cues selected.

L is generally already in use, as a shortcut for the built-in command “load”, so we might use ⇧L (shift-L). If you have a remote control device that sends MIDI notes, you could also set a MIDI trigger for the cue. The example has a MIDI note on trigger set, listening for note 60 with any velocity.

We can now select all the cues which we want to loop and hit ⇧L. The OSC cue will start, and the selected cues will be set to loop.

The attached workspace contains many useful OSC commands that will work in this way. You can copy and paste any OSC command you might find useful into your own workspaces. Generally, it’s best to keep all your hotkey cues together in a separate cue list so that they don’t get confused for cues that are part of your performance. Remember that batch commands are potentially dangerous, particularly when they can be triggered by simple key presses. If you put all your editing hotkey cues in a separate cue list, you can simply disarm that list when you are not programming. 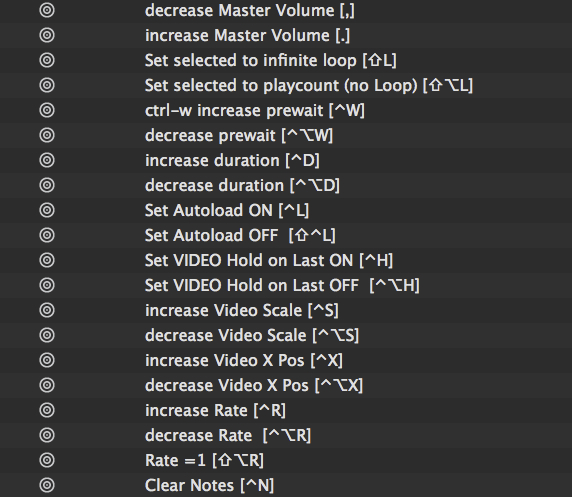 You can combine these in Group cues and give the Group cue a hotkey to build up more complex actions. For example, to set selected cues to not loop and hold on their last frame, you would put the OSC cues for these two functions into a start-all Group cue, then assign a hotkey or MIDI trigger to that Group. You may wish to remove the triggers for the cues inside the Group, or keep them in place. It all depends on how you plan to use them.

If you are interested, here is the AppleScript solution for setting the selected cues to loop:

The OSC method is a lot simpler, and it has another advantage as well. If you send an OSC command to a cue that doesn’t understand it, then it just politely ignores it without any drama. If you do the same with an Script cue, it has a nervous breakdown, cries in the corner, and decompiles itself. So you have to put even more code into the AppleScript version to test what sort of cue it is working with. Some proper programmers like this sort of thing, but it’s generally easier to use an OSC cue where it will achieve the same end!

OSC within QLab 3 is a bit of a one trick pony though, as a cue can’t modify its custom message depending on what’s going on in the rest of the program. In QLab 4, OSC cues (called Network cues) can get values from other cues using OSC queries. This is discussed in detail in the final section of the chapter called Space Hijack.

Because of this, in QLab 3, Script cues are the best way of achieving anything more complex than setting one parameter to a fixed value. In QLab 4, OSC has a bit more flexibility, but Script cues are still very useful. For instance, (and as a reward for reading this far) if you didn’t know this already, here is the most useful AppleScript in the universe, based on original scripts by Chris Ashworth, Rich Walsh and Jeremy Lee:

If you have an Audio cue, you will probably want to fade it out at some point. Put the following script into a Script cue with a hotkey like ⌃F, select your Audio cue, hit the hotkey, and a Fade cue will magically appear below it, targeted and set up to fade out.