This project allows AU or VST Musical Instruments like virtual pianos and soft samplers to work inside QLab. It requires a registered copy of Plogue Bidule which is one of the few AU plug-ins that can host other plug-ins and allow you to connect to them via the internal IAC MIDI Buses.

Plogue Bidule will only work correctly in QLab when inserted as an effect in a Cue Output.

QLab’s audio engine only runs if a cue with audio is actually playing. Playing a MIDI cue to the soft synth or sampler requires a dummy audio cue playing with it before you can hear the output.

Here it is in action (view full screen):

This video demonstrates one of the most useful ways in which the power of this can be harnessed. Piano music which needs to stop on cue as if the playing has been interrupted is very difficult to achieve realistically when using a recording and a Fade cue. However, if you use MIDI notes to play a virtual piano, and the stream of MIDI notes is interrupted then the piano will stop and decay quite naturally. This example goes further by slowing the playback rate of the MIDI file immediately before the stop cue. This can occur at any point in the piano music and sounds completely natural. 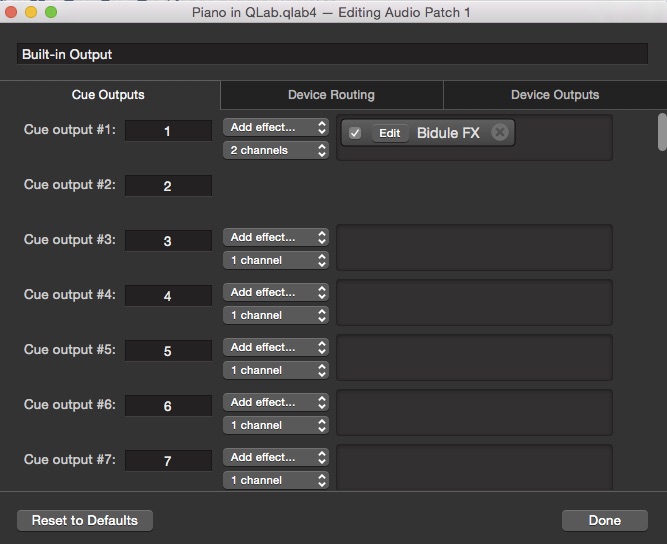 Plogue Bidule allows complex arrangements of audio and MIDI components to be assembled within the plugin. Here is the plug-in programming for this example: 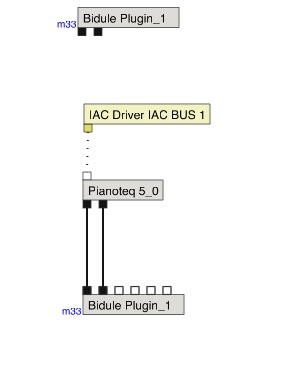 At the top are the unused audio inputs.

Next is an “Input MIDI” device which brings IAC Bus 1 into the plug-in. This is how we will route MIDI playback into the plugin from a MIDI File cue.

The Input MIDI device connects to our sound module or sampler. The example uses Pianoteq 5 which is a modeled piano. 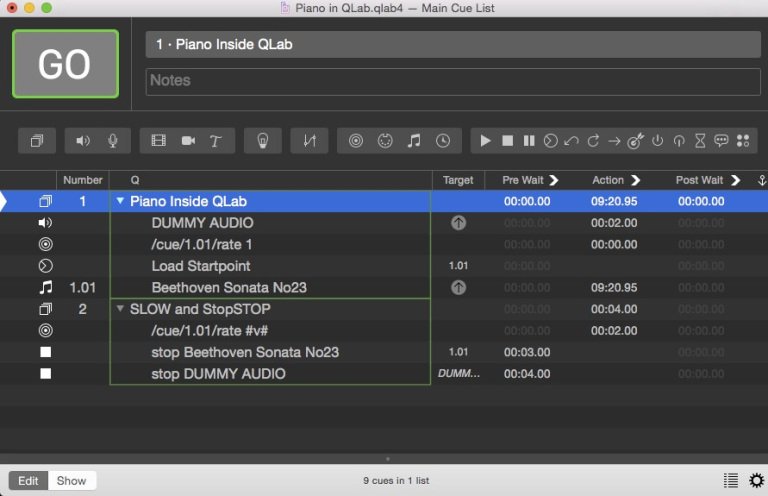 In the cue list, cue 1 is a Group cue set to “start all children simultaneously” which contains:

Cue 2 is also a Group cue that makes the piano stop in a natural-sounding way. The first child cue is a Network cue which sends an OSC message with fading values to slow the rate of the MIDI File cue: 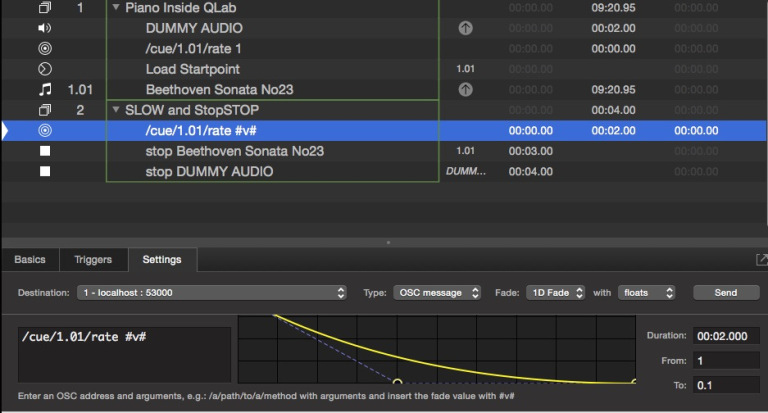 Then the Midi File playback is stopped and, after a suitable decay time, the dummy Audio cue is stopped. If no other audio is playing, that stops QLab’s audio engine altogether.

You will need a registered copy of Plogue Bidule Plug-in for this to work.

Pianoteq5 is available here but you can, of course, use any AU Instrument plug-in instead. Synths, samplers, procedural effects generators, etc.

Pianoteq is a registered trademark of MODARTT S.A.S. France. Plogue Bidule is a trademark of Plogue Art et Technolgie, Montreal

The Midi File used in this example is by Bernd Krueger http://www.piano-midi.de licensed under a Creative Commons Attribution-ShareAlike 3.0 Germany License.