This workspace shows how a simple pan can be made more realistic by the addition of a Doppler pitch shift. There are two cues in this example: cue 1 is a police car with siren panning left to right. Cue 2 is the same sound, but it simulates the Doppler effect by dropping the pitch of the sound as it passes. The effect is quite subtle, but it is details like this that will subconsciously register with an audience and give greater realism and verisimilitude to your design. Here’s a screen recording of the workspace in action:

The two cues are Group cues set to start all children simultaneously. This means that when each Group cue is triggered, all the cues within the Group will begin at the times entered in their pre-wait column. 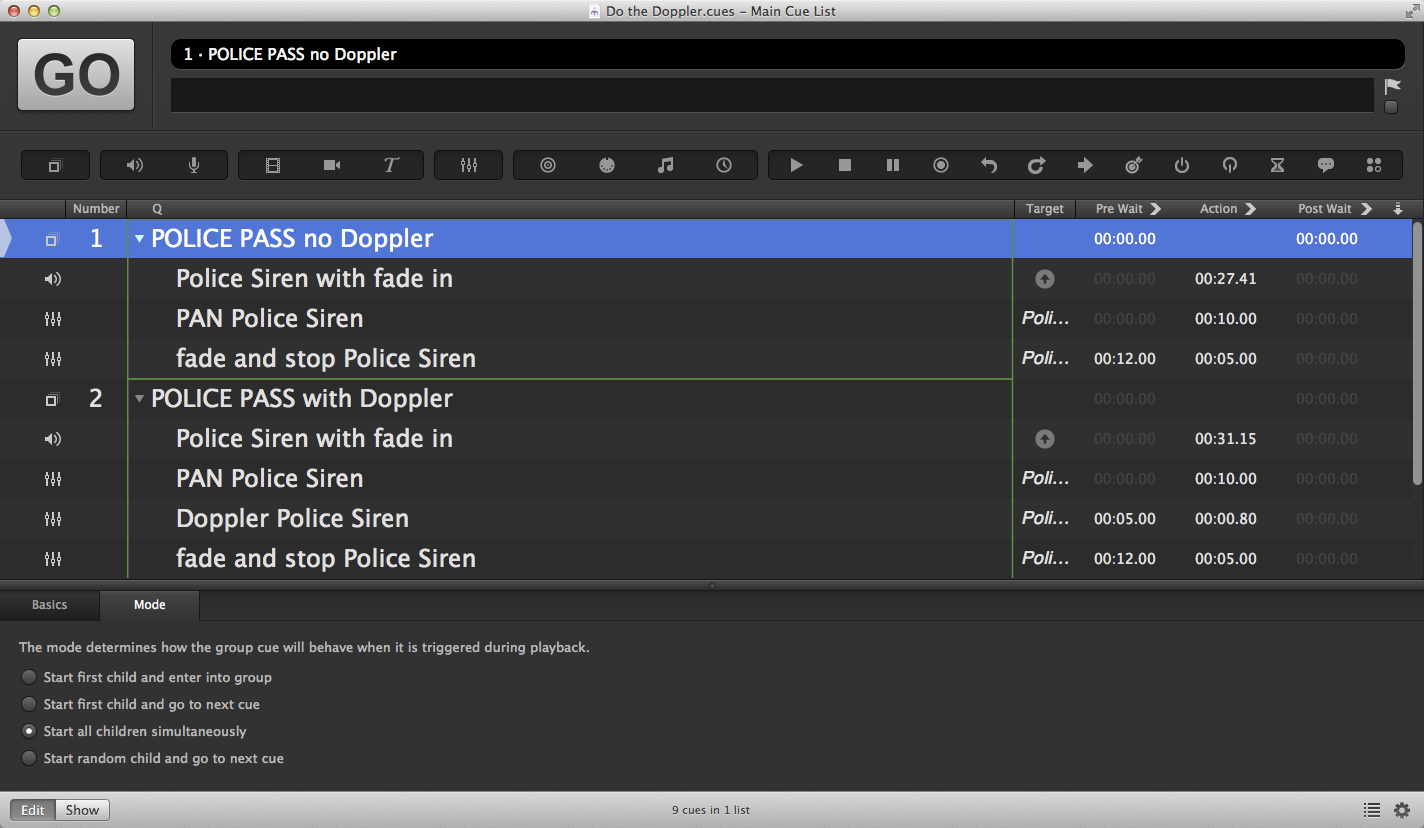 In both groups, the Audio cue starts on the left output only (output 1). 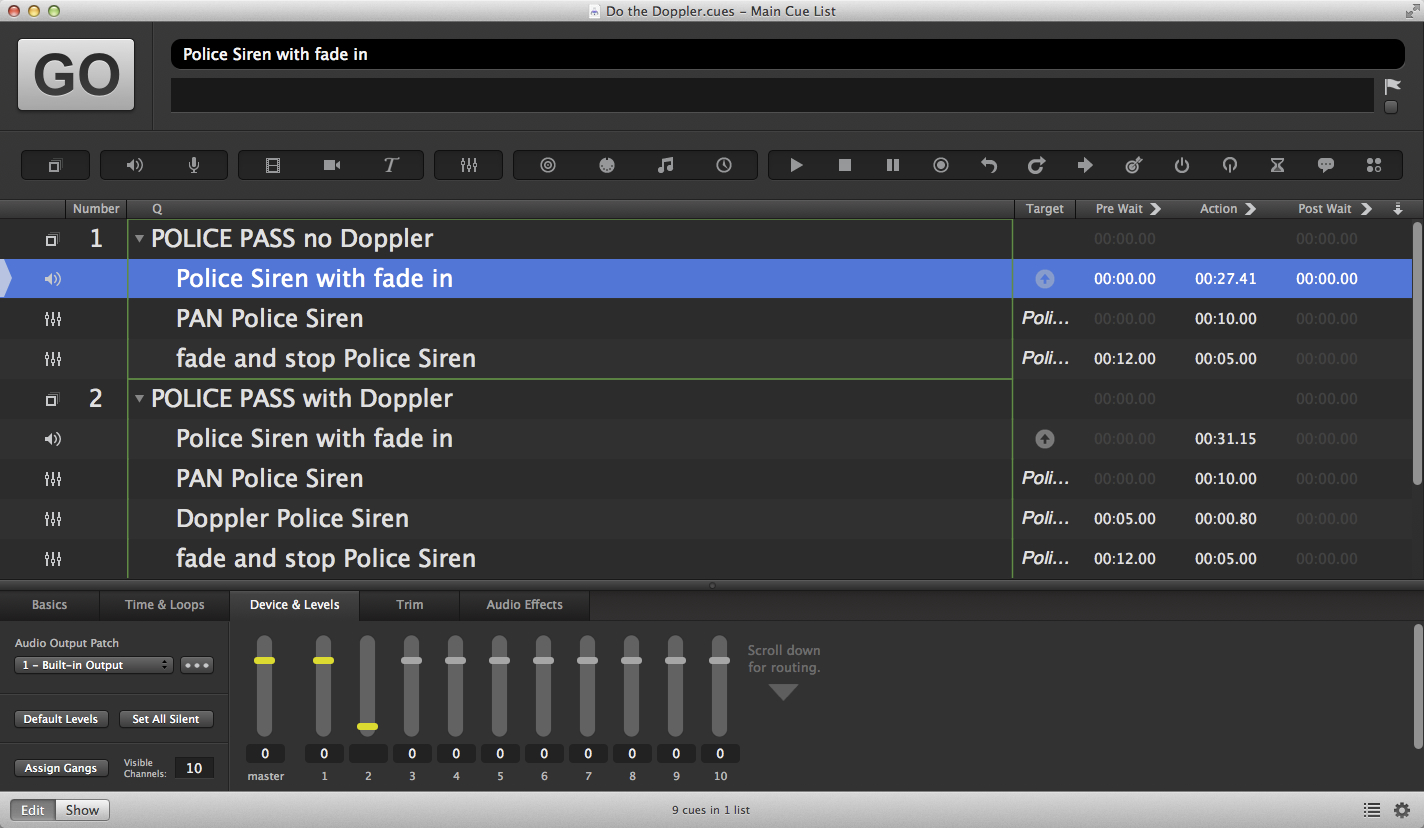 The example uses a mono recording for reasons we will discuss later. It is important to check that the single channel of the target audio is assigned to both cue outputs, like this: 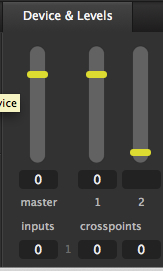 This won’t usually happen by default. On a mono cue, the default will only send mono audio to the odd-numbered slider. So, you will have to enter 0 in the crosspoint which sends to cue output 2, as shown in the picture above.

The audio starts a bit abruptly, so we use the integrated fade shape to create a fade in at the beginning of the cue: 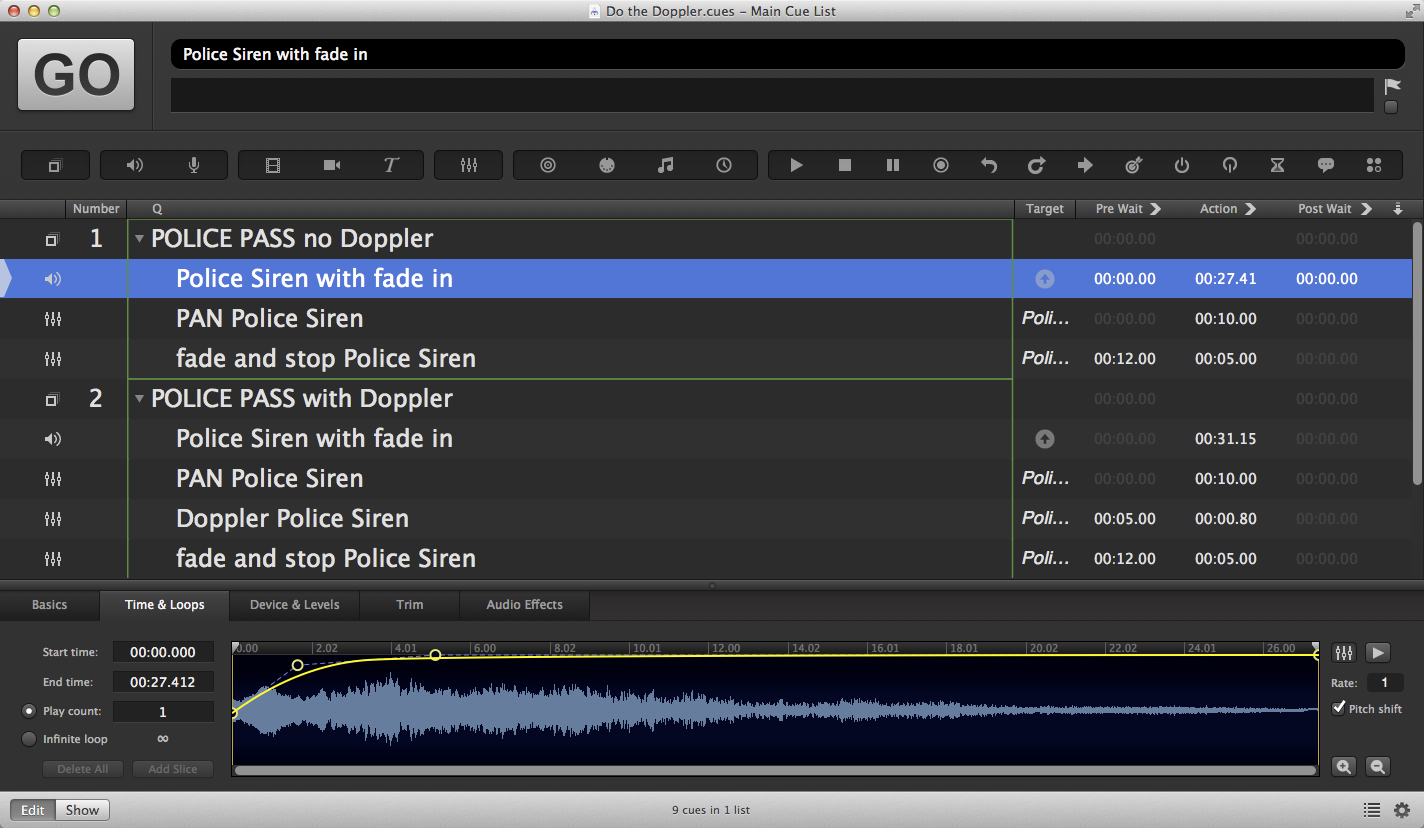 To create the pan, add a Fade cue targeting the Audio cue. Give the Fade cue a duration of 10 seconds. The ending state that we want is no audio coming from the left and full volume from the right, so we set cue output 1 to -inf, and cue output 2 to -2.8 to give a nice loud output on the right. 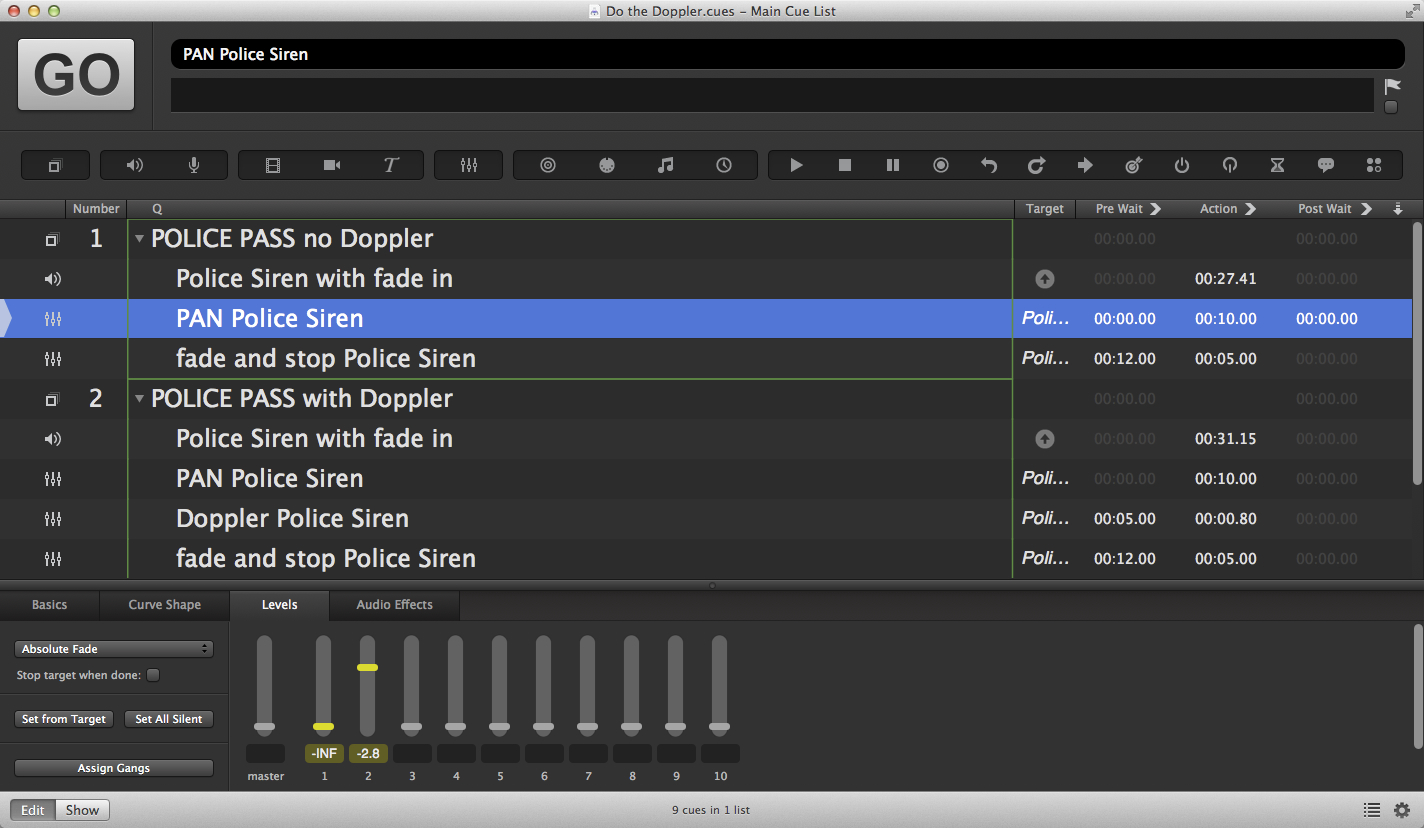 It is likely that the default fade curve will give us a dip in volume in the middle, so in the curve shape tab of the inspector we can switch to Custom curve and reshape the curves to something like this: 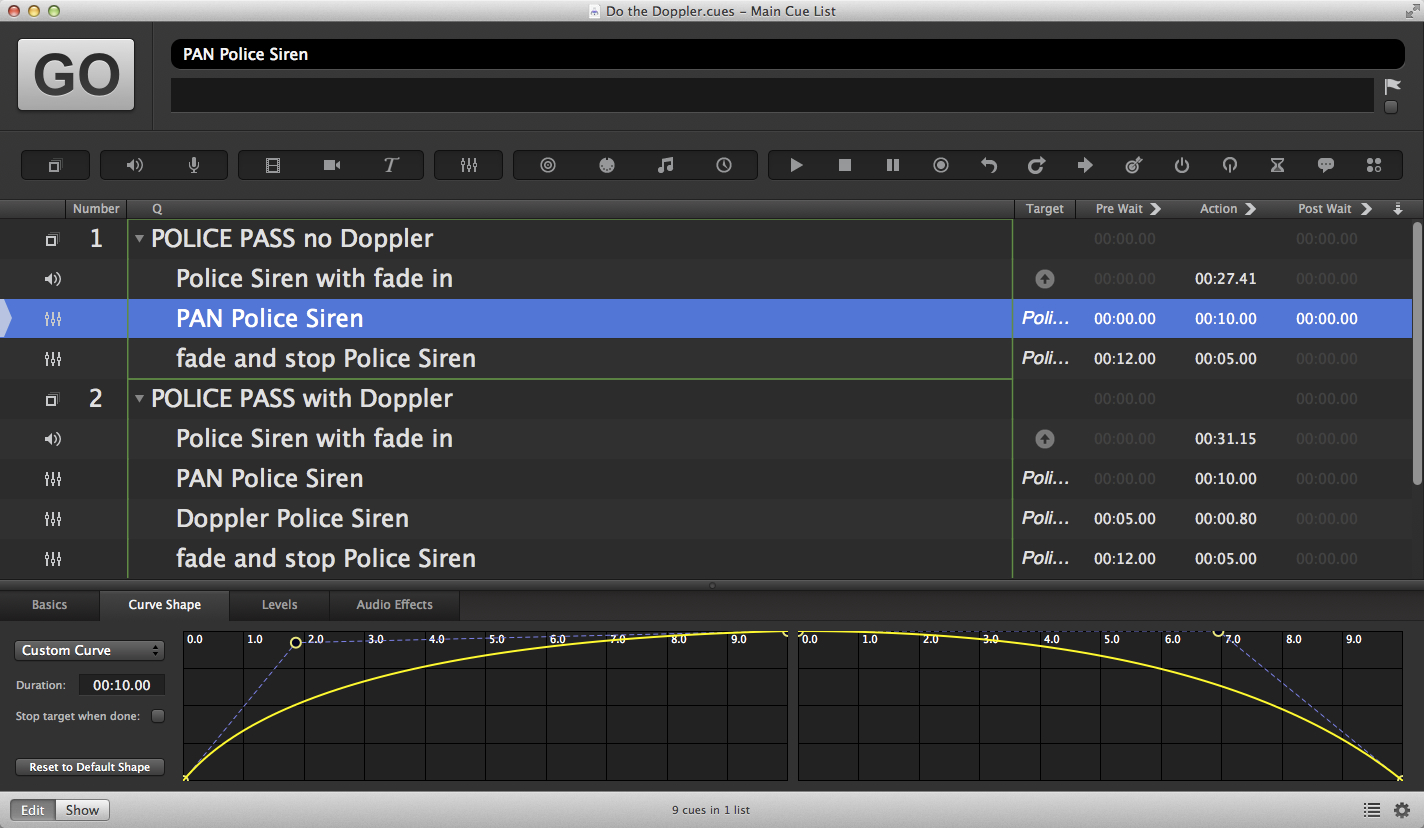 Finally, after a 12 second pre-wait, another Fade cue targeting the Audio cue is triggered. This cue fades out and stops the Audio cue. 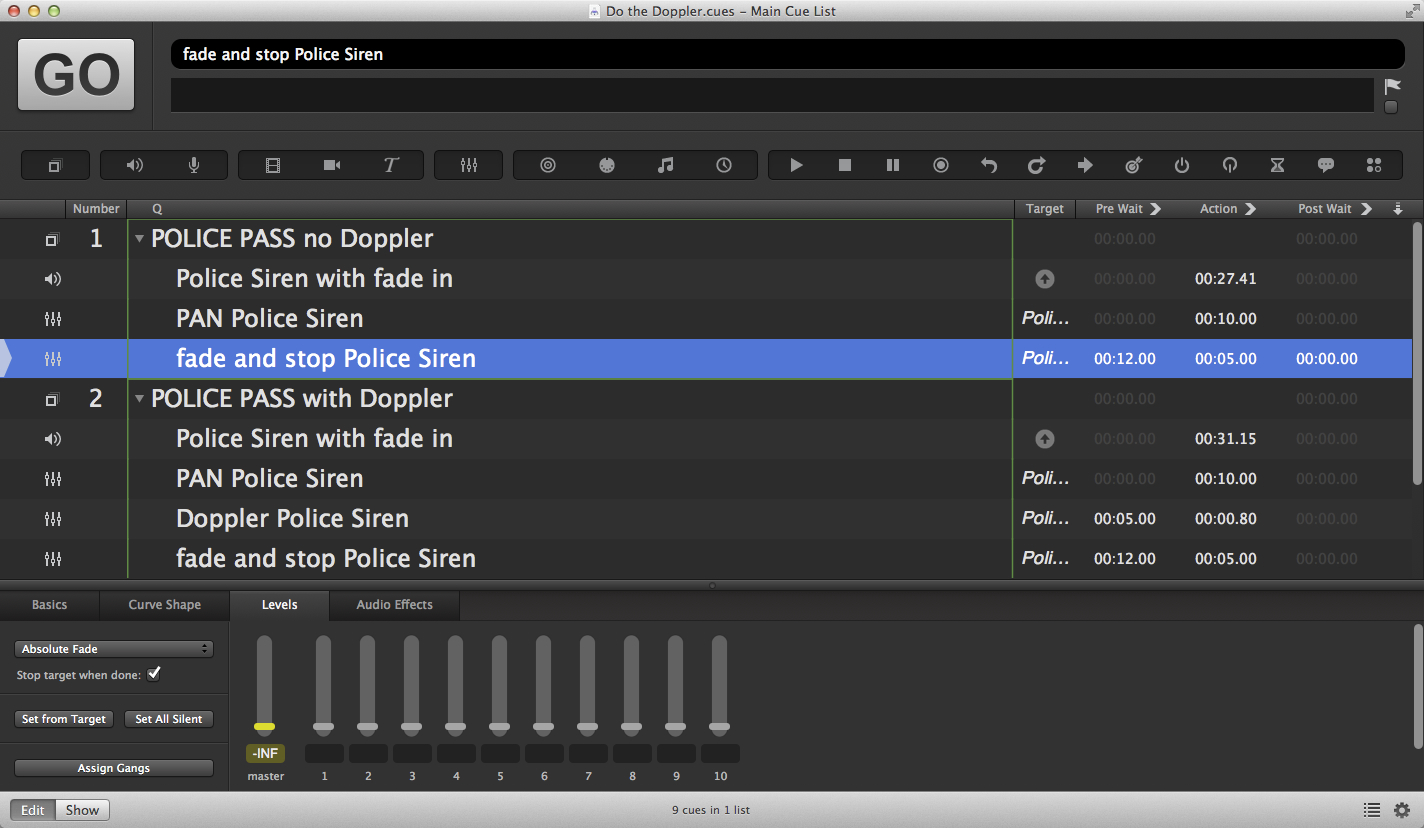 Cue 2 is similar to cue 1, with the addition of another Fade cue targeting the Audio cue. This one starts at the midpoint of the pan cue, i.e. 5 seconds after the Group cue starts, and has a much shorter duration. Instead of altering the level of its target, it instead fades the playback rate from 1 down to 0.88, lowering the pitch of the sound over a duration of 0.8 secs. This simulates the Doppler effect. 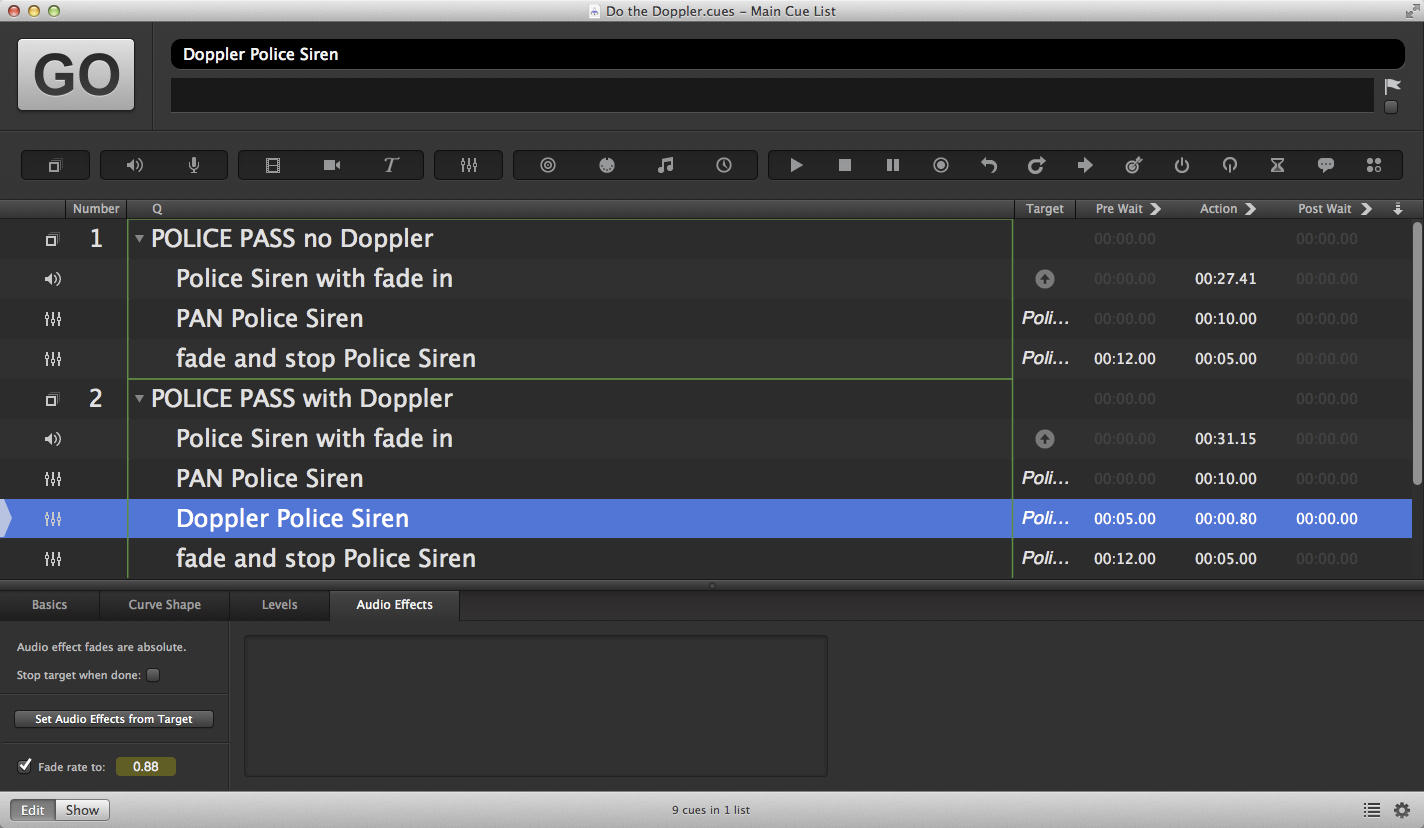 It is important to select an appropriate recording to use for the effect. The reason the example uses a mono recording is to be in control of the timing of the pan. If you use a stereo recording, where the position of the vehicle is clear all the way through, then there is already a point in the recording where the Doppler shift occurs and you are not likely to have much success trying to alter the depth and perspective of the original recording. About the only thing you can do is reverse the direction of the baked-in pan by sending the left channel of the recording to the right output, and vice versa: 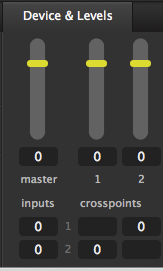 You could also exaggerate the pan in the stereo recording by starting hard in one channel and finishing hard in the other while retaining the additional depth that using a stereo cue will give you at the midpoint. To do this you just use the sliders in the same way as for the mono cue in the example.

However, it really is best to use a mono recording so that you have full control.

Audio in Demo: recorded by MultiMax2121, and released into the public domain on freesound.com.