Although most audio files that are used in QLab are mono or stereo, QLab can actually handle files with up to 24 channels. This means that multitrack files can be used in QLab and mixed down directly to stereo (or other formats) using the Device and Levels tab in the inspector. This allows you to tailor your mix to your exact needs without the old routine of bounding a mix, auditioning it in the theater, noting changes, returning to the DAW, and re-bouncing. While that could be achieve with a Group filled with mono and stereo stems, using a single multitrack file means you only need to set start times, end times, loops, and devamps once. Sometimes you may want every individual track in your song available, but generally it is easier to premix stems in your DAW down to basic groups, e.g. Drums(L+R), Chorus Vocals, etc. and balance these pre-made sub-mixes within QLab.

Here’s an example workspace in action:

We can then add the merged file to our QLab workspace. 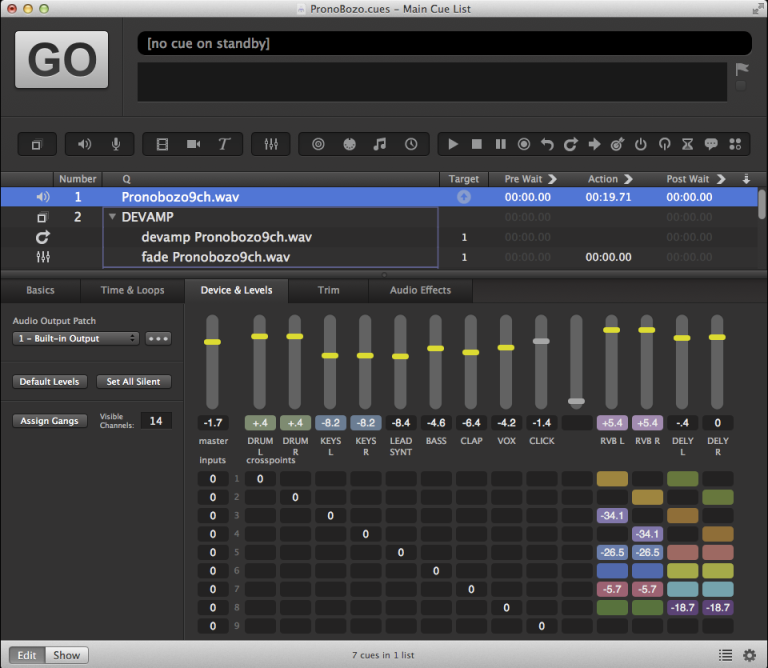 You can see that the file has nine channels and the cross points have been set to the default 1-to-1 setting. The cue outputs have been named according to the track contents. You will also notice that there are two reverb send channels (11+12) and two delay send channels (13+14). Remember these sends are effectively prefade, so will need adjusting when you change cue output levels.

The stereo pairs, like Drums L+R, are ganged (indicated by the colored backgrounds) and the reverb sends are also ganged. In order to set this up, and also to enable all the tracks to be mixed to a single stereo output, we need to utilize several sections of Workspace Settings. The first section we will open is Workspace Settings → Audio → Edit Patch → Cue Outputs. 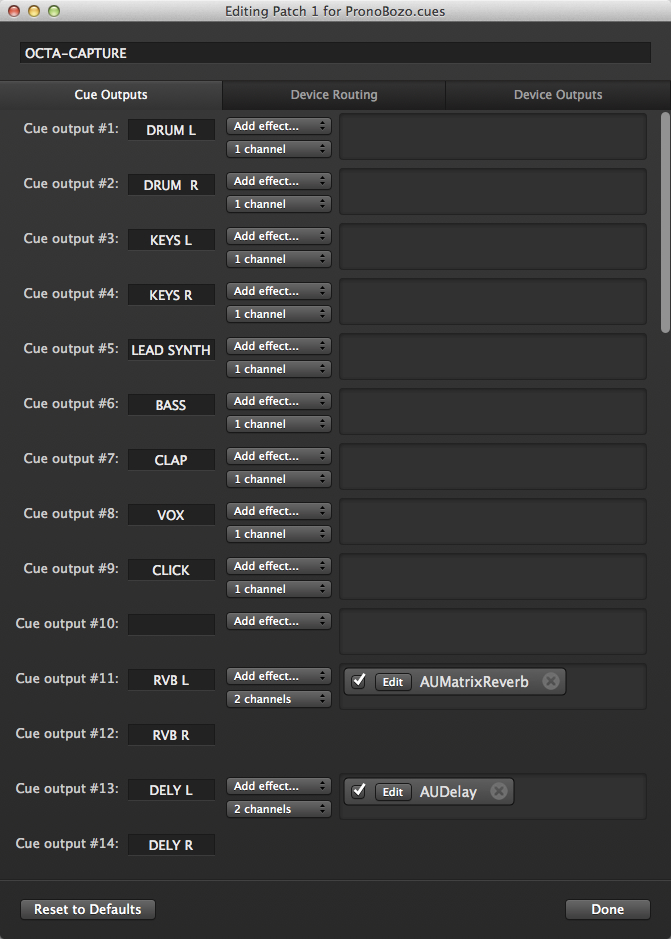 Here we can name all the cue outputs, so the names appear in the Device and Levels tab of the inspector for Audio cues. We insert a two-channel reverb on Cue Outputs 11+12. (I have used Apple’s AUMatrixReverb which should be available on all Macs that can run QLab 3) and a delay on Cue Outputs 13+14. We then open the Device Routing tab. Here we have matrixed the 14 cue outputs to device outputs 1+2, which means that the 14 cue are being mixed down to stereo. You will also notice that cue output 9 (CLICK) is not matrixed to stereo, but instead to device output 3. You’ll only see this if you have an output device with more than two outputs. Device output 3 can then feed a pair of headphones or a monitor speaker for the conductor. 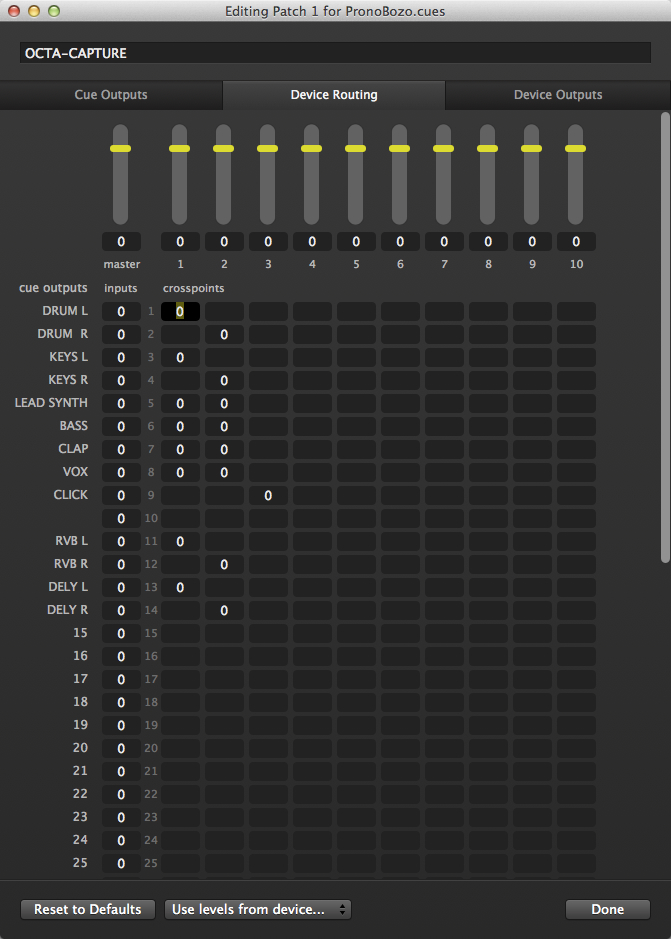 In the example, you will notice an output meter for Device Outputs 1+2. This is inserted as a 2-channel device on the Device Outputs. This plugin is not part of the free set of AudioUnits included on every Mac, so it’s been deleted in the downloadable workspace. If you want to make use of output metering, you will have to add your own plugin. 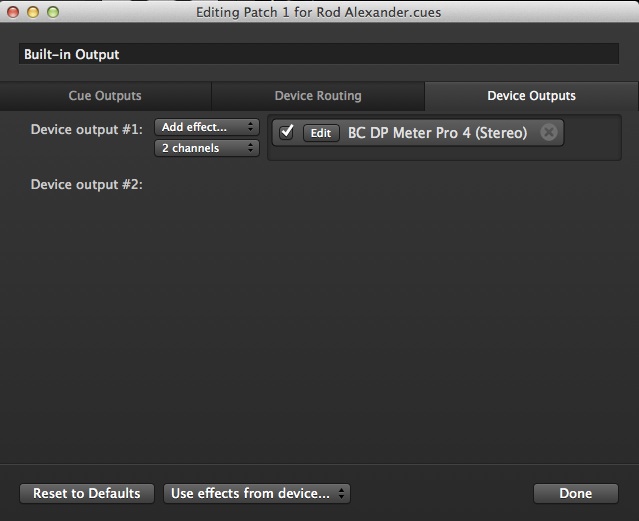 Returning to the cue list, specifically to the Device and Levels tab of the inspector for Audio cues, we can set up the gangs. 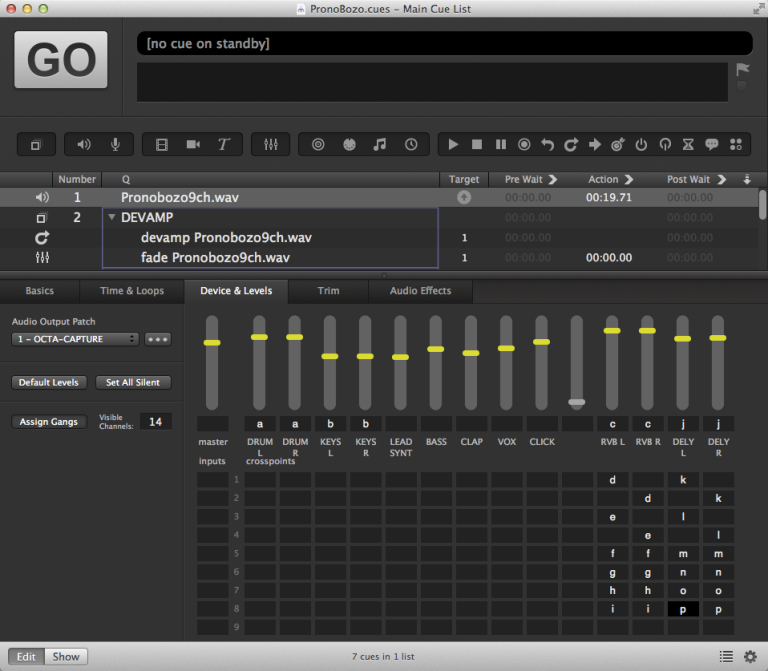 Gangs are set for the stereo stems (drums and keyboards) and for the Reverb and Delay L+R sends. Gangs are also set for the crosspoints that feed inputs to the reverb and delay sends. For stereo stems, gangs are set so that the odd-numbered track goes to the left send and the even to the right. For mono tracks, the track is sent to both the left and right halves of the sends.

In the Time and Loops tab, you can see that the Audio cue has slices. The first and second slices have infinite loops set that will de-loop and continue to the next slice when Devamp cues are triggered. The Devamps also trigger Fade cues which change the mix at the slice transitions. 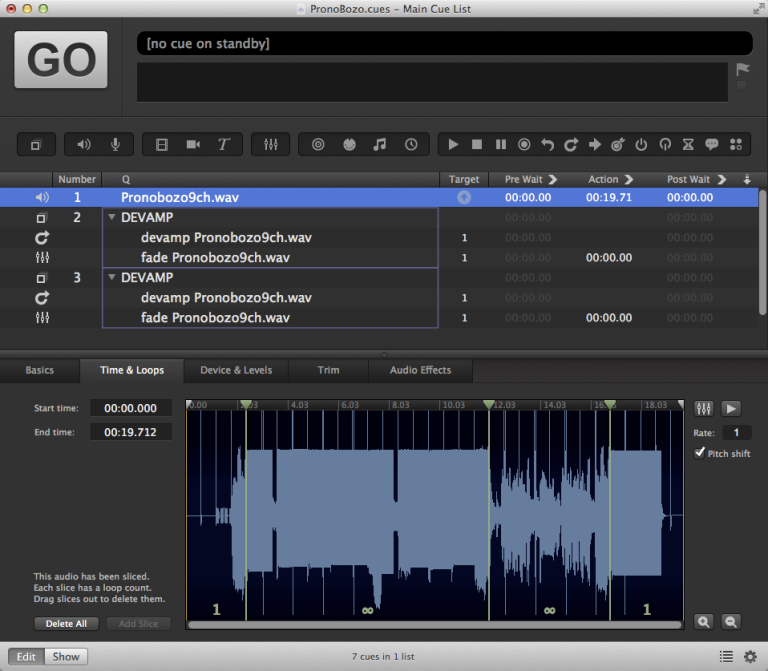 There’s a four-beat count-off which plays only to device output 3, the imagined conductor headphone mix, with some introductory audio after the third beat.