A workspace in QLab can contain an unlimited number of separate cue lists. By default, all new QLab workspaces have one cue list, titled “Main Cue List” and all newly created cues go in that list.

To see the cue lists in a workspace, and to add or remove cue lists, open the sidebar by choosing Lists / Carts & Active Cues from the View menu, or by using the keyboard shortcut ⇧⌘L, or by clicking on the list button on the right side of the workspace window footer. The sidebar has two tabs; the left tab shows cue lists (and cue carts too, but we’re talking about cue lists right now.)

You can create a new cue list by clicking on the New List button. You can delete a list by selecting it and choosing Delete from the Edit menu or by using the keyboard shortcut ⌘⌫ (delete).

Note: deleting a cue list deletes all the cues within that list too. Be careful! But also, rest easy knowing that you can Undo cue list deletion.

Cue lists have cue names and cue numbers just like cues, and they follow the same rules and can be edited in the same ways. 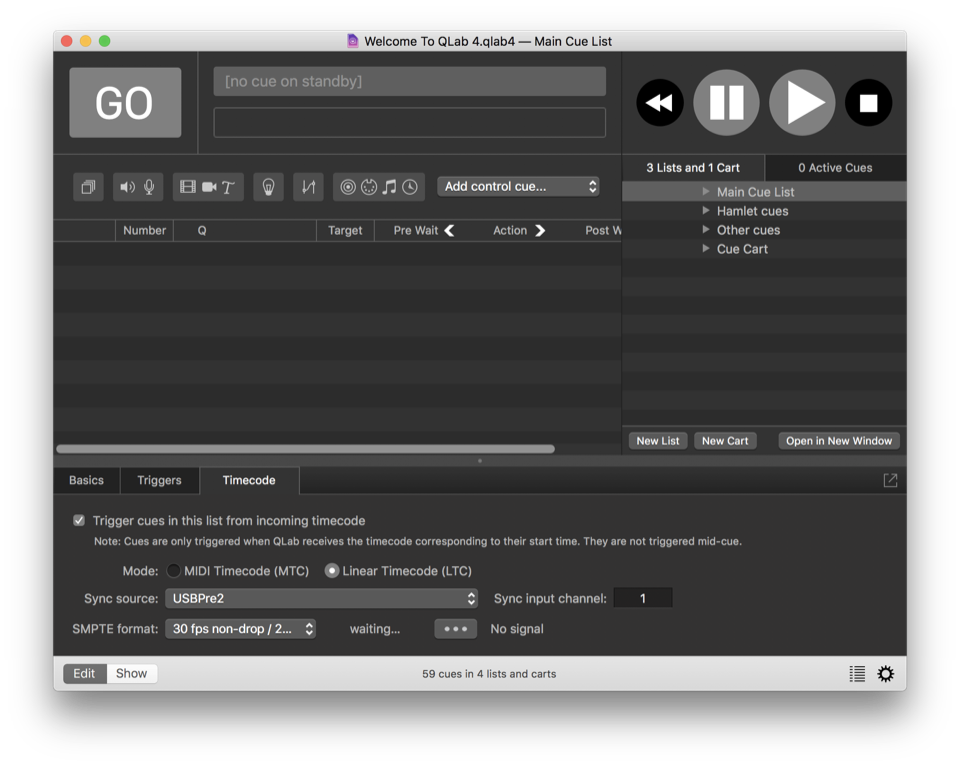 To enable incoming timecode on a cue list, check the box. Next, choose whether the cue list will listen for LTC (which stands for linear timecode or longitudinal timecode), or MTC (which stands for MIDI timecode.) QLab does not support VITC (vertical integrated timecode) because we’ve frankly never heard of it being used outside of a film set.

Once you’ve chosen LTC or MTC, choose an incoming MIDI device, or audio device and input channel, and the format (a.k.a. frame rate).

The [•••] button will open the Timecode window to allow you to watch the incoming timecode and verify that everything is working properly.