A Group cue is a type of cue which contains other cues. The cues within the Group, called “child” cues, can be any type of cue including other Group cues, and will behave in one of several ways depending on the mode of the “parent” Group.

The default keyboard shortcut to create a group is ⌘0. If you create a Group cue while one or more other cues are selected, those cues will be placed inside the newly created Group. Once a group is created, it can be collapsed or expanded for visual simplicity using the gray disclosure arrow in the upper-left corner. Group cues behave exactly the same way whether they are collapsed or expanded.

When a Group cue is selected, the inspector shows three tabs: Basics, Triggers and Mode. Group cues set to Timeline mode also show a “Timeline” tab. Please refer to the section on the inspector to learn about the Basics and Triggers tabs of the inspector.

A Group cue can be set to one of four modes:

A Group in this mode has a green outline with square corners.

You can learn more about Timeline mode in the Timeline tab section below.

A Group in this mode has a blue outline with rounded corners.

You may have observed that this is not at all different from how the same list of cues would behave if there were no Group cue, and you’d be entirely correct. This mode is essentially an organizational tool to visually separate cues into different sections within the cue list, and to hide or show an entire batch of cues with a single click (on the grey disclosure arrow in the upper-left corner of the box).

Start first child and go to next cue.

A Group in this mode has a blue outline with square corners.

When a Group set to this mode is triggered, the first child cue will start, and the playhead will advance to the next cue after the Group. Therefore, other cues within this type of group will get skipped over unless they are connected with auto-continues or auto-follows. By using auto-follows and/or auto-continues, the child cues within the Group can be made into a cue sequence, which will progress independently of the playhead.

Since the playhead advances to the cue after the Group, you can continue to press GO, triggering cues and advancing the playhead, while the cues within the Group are running.

Start random child and go to next cue.

A Group in this mode has a purple outline with square corners.

When a Group set to this mode is triggered, a randomly selected child cue that is both armed and not currently playing will be triggered, and the playhead will advance to the first cue after the Group. Each armed cue within the Group will be triggered once before any of the cues is triggered a second time. This form of cueing is often referred to as “round robin” triggering.

Note: this is fairly different from the behavior of start-random Groups in QLab 3. If you have any questions about it, please don’t hesitate to contact the support team and ask.

Starting with QLab 4.3, Groups set to start all children simultaneously have a Timeline tab in the inspector, which display the Group’s children in a visual timeline editor similar to the timeline found in many audio and video editing programs. 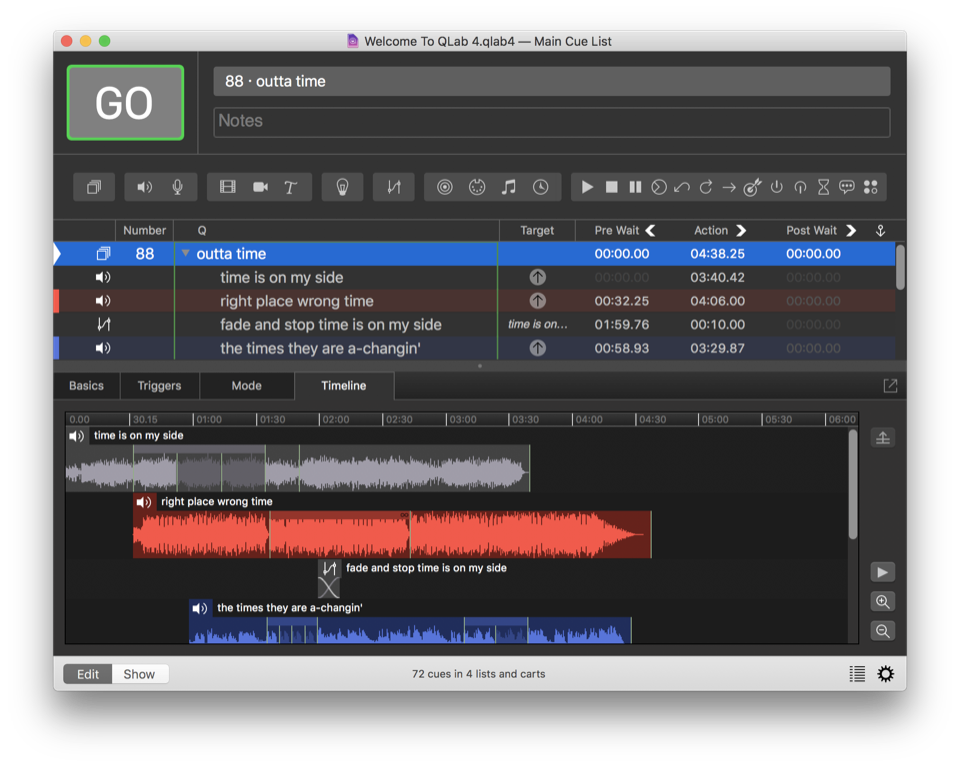 Cues can be adjusted in the timeline in several ways:

When the mouse is hovering over a cue, it will turn into a hand. Click and drag left or right to move the cue in the timeline, thus adjusting its pre-wait time. While a cue is being dragged, blue guidelines appear indicating the start and end of all the other cues in the Group, as well as any slices within those cues. The dragged cue will snap to these guidelines in order to make it easy to align cues with each other. If you want to focus on the guidelines belonging to only a single cue, drag over that cue’s “lane.” The guidelines for all other cues will be hidden, and you can then drag left or right as normal.

Starting with QLab 4.4, dragged cues also snap to the current playback time which is indicated by the vertical yellow line. This makes it easy to pause playback at a desired moment, then drag a cue to exactly that moment.

When one or more cues are selected in the timeline, the following keyboard shortcuts are available to nudge those cues forward and backward in the timeline by adding or subtracting to their pre-waits:

When the mouse is hovering at the beginning or end of a cue which has a duration, it will turn into a bi-directional horizontal arrow. Click and drag left or right on the start of the cue adjust its start time and pre-wait time simultaneously, or on the end of the cue to adjust the end time of the cue. These adjustments necessarily also adjust the duration of the cue.

When the mouse is hovering over an Audio or Video cue, hold down the Option key to slip the cue, adjusting its start and end time without adjusting its pre-wait time or duration. Note that only cues without slices can be slipped.

When the mouse is hovering over the bottom edge of a cue, it will turn into a bi-directional vertical arrow. Click and drag up or down to scale the display of the cue. This adjustment is purely visual and does not alter the behavior of the cue in any way.

To scale the whole timeline view, instead of just a single cue, you can scroll vertically while holding down the option key, or use the keyboard shortcuts ⇧⌘- and ⇧⌘+/=.

On the right side of the timeline view, beneath the pin/unpin button are three more buttons:

You can also zoom in and out on the timeline by using pinch gestures on a trackpad, by scrolling horizontally while holding down the option key, or by using the keyboard shortcuts ⌘- and ⌘+/= (that is to say, the +/= key with or without the shift key held down.)

Group cues can become broken for the following reasons:

A cue in the group is broken.

Fix the cue inside the Group, and the Group will be fixed as well.