Auditioning a cue means playing that cue outside of the context of your show as a whole, perhaps experimentally or while developing the cue for later use. In situations like this, it can be preferable to play the cue in a different way than normal. For example, you might want to audition an individual Audio cue in your headphones instead of through the sound system for everyone to hear. If you are working on a complex video system, but the lighting designer is focusing lights and the projectors must be turned off, you might want to audition all Video cues on your computer’s screen so that you can get work done without disturbing your colleague.

Workspace Settings → Audition is where you tell your workspace what you want it to do when you audition a cue of a particular type. There, you’ll find a table which divides all output from QLab into seven categories: 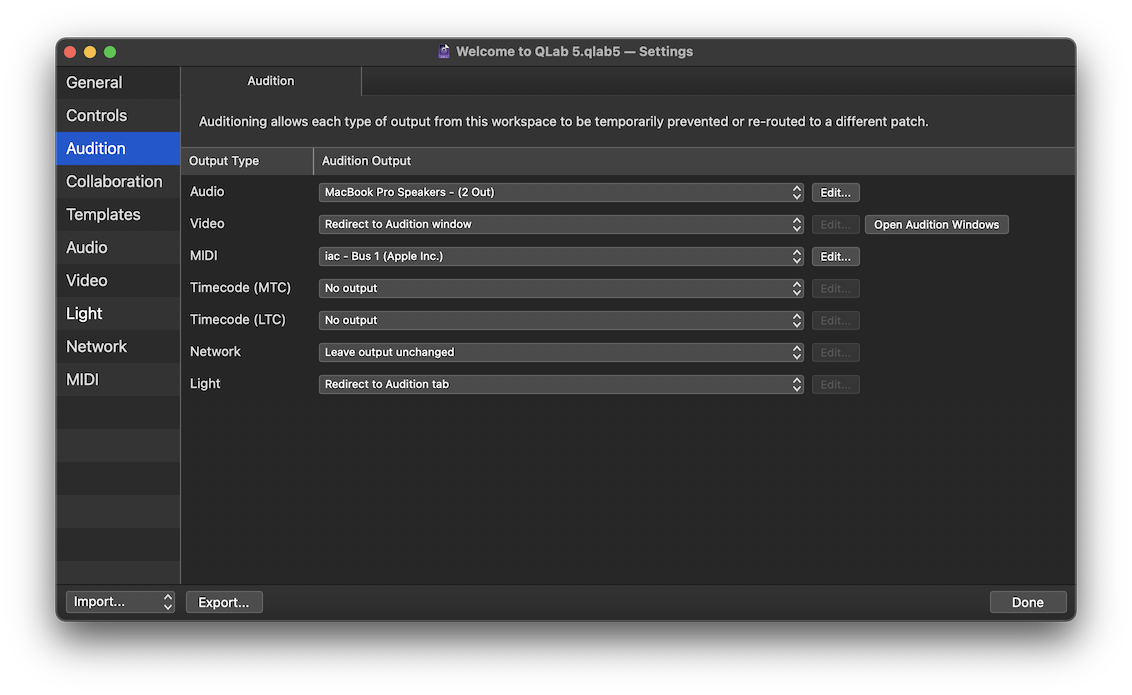 Each type of output has a pop-up menu next to it which contains two to four of the following options:

Note that using an alternate patch to audition video requires a video license.

There are two workspace-wide controls for auditioning cues: audition and audition preview selected, both of which have keyboard shortcuts which can be customized in Workspace Settings → Controls → Keyboard. When these controls are used, any cues that they start will play through the audition output that has been selected for their output type.

If a cue sequence is standing by, audition will cause the entire cue sequence to run according to its regular timing, with every cue in the sequence playing through the audition output that has been selected for its output type.

Cues which are started normally while other cues are auditioning will play through their normal outputs.

If a cue is in the midst of auditioning and it’s instructed to start normally, which is to say to play through normal outputs and not audition, then the cue will immediately stop and restart through normal outputs. You do not need to manually stop it first. The idea here is to make it as easy as possible to audition a cue, then play it normally as quickly as possible.

Sometimes, you might prefer to audition all cues for a while, such as in the above example of a projection designer working while the video system is switched off.

In this case and others like it, you can select Turn on always audition from the Tools menu. When always audition is turned on, the button will become an Audition button, colored blue to help clarify that the button is in a different mode. Additionally, the word Audition will appear in the workspace footer. When always audition is on, clicking the Audition button or using its keyboard shortcut (space by default) will behave as an audition instead of a regular . Likewise, previewing a cue by using the button in the Time & Loops tab or by using the keyboard shortcut (V by default) will behave as an audition preview instead of a regular preview.