A cue list is a linear collection of cues, ordered visually from top to bottom. When a cue in a cue list receives the instruction to , it starts playing and the playhead moves to the next cue or cue sequence. While it’s easy to jump around in a cue list, the basic design of cue lists assumes that you will use it in a more or less linear way.

A workspace in QLab can contain an unlimited number of separate cue lists. By default, all new QLab workspaces have one cue list, titled “Main Cue List” and all newly created cues go in that list.

To see the cue lists in a workspace and to add or remove cue lists, open the sidebar by choosing Lists / Carts & Active Cues from the View menu, or use the keyboard shortcut ⌘L. You can also click on the button on the right side of the workspace window footer. The sidebar has two tabs; the left tab shows cue lists (and cue carts too, but we’re talking about cue lists right now.) 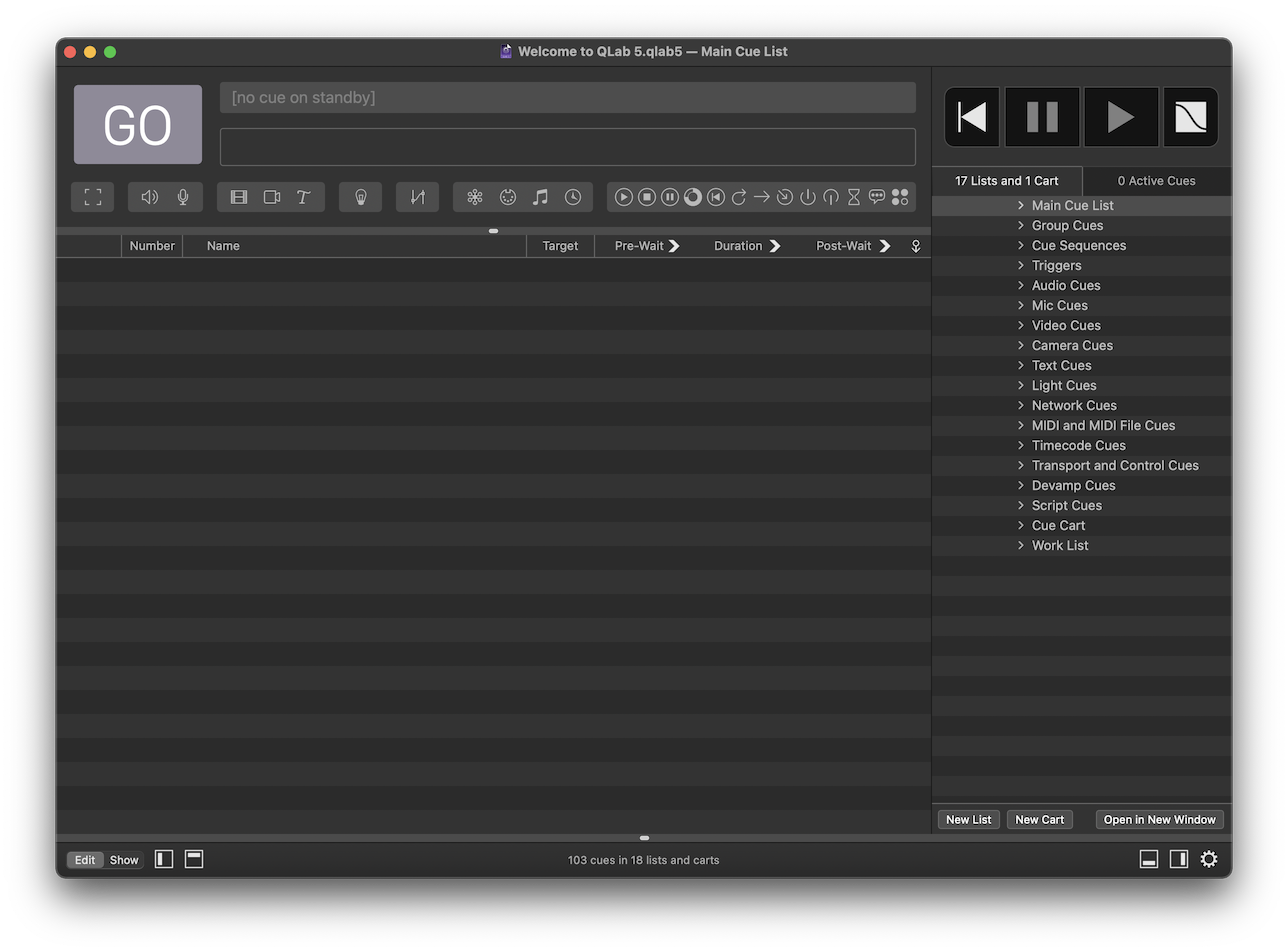 You can create a new list by clicking on the New List button. You can delete a cue list by selecting it and choosing Delete from the Edit menu or by using the keyboard shortcut ⌘⌫ (delete, sometimes labeled “backspace”).

Note: deleting a cue list deletes all the cues within that list too. Be careful! But also, rest easy knowing that you can Undo cue list deletion.

You can open additional windows to view separate cue lists and carts by selecting the list and clicking the Open in New Window button towards the bottom of the sidebar, or by right-clicking (or control-clicking or two-finger-clicking) on the name of the list or cart.

Cue lists have cue names and cue numbers just like cues, and they follow the same rules and can be edited in the same ways.

The cue list whose cues are displayed in the main area of the workspace is called the active cue list. Only one cue list or cart can be active at a time, but the other cue lists and carts in a workspace can still be used even when they’re not active.

The following things are true for the active cue list or cart only:

The following things are true for all cue lists and carts, whether or not they are active:

In short, cue lists and carts that are not active can still be quite active and are fully useable.

Starting a cue list is the same thing as pressing in a window displaying that list. This means that you can use the Triggers tab to assign a hotkey or a MIDI message to a specific cue list, turning that hotkey or MIDI message into a list-specific button.

When a cue list is selected, the inspector shows three tabs: Basics, Triggers and Timecode. Please refer to the Inspector section of this manual to learn about the Basics and Triggers tabs of the inspector.

The On Stop pop-up menu determines how cues which are triggered by timecode will behave when timecode stops: they can either pause, stop, or keep running. When the “pause” or “stop” options are selected, the Freewheel time sets the window of time during which a dropout of timecode is considered accidental. Freewheel time can be set from 0 to 2 seconds.

The Mode radio buttons determine whether the cue list will listen for MTC (which stands for MIDI timecode,) or LTC (which stands for linear timecode or longitudinal timecode.) QLab does not support VITC (vertical integrated timecode) because we’ve frankly never heard of it being used outside of a film set.

Once you’ve chosen the mode and the sync source, select the SMPTE format of your incoming timecode. This is usually referred to as frame rate. It’s important to be sure that every device on your timecode network is using the same format, or else your cues will not line up perfectly.