The Group cue is a type of cue which contains other cues. The cues within a Group, called “child” cues, can be any type of cue including other Group cues, and will behave in one of several ways depending on the mode of the “parent” Group.

Group cues have five modes which can be set in the Mode tab of the inspector.

Timeline Groups have a green border with square corners.

You can learn more about Timeline Group cues in the Timeline tab section below.

Playlist Group cues have an orange outline with square corners.

You can learn more about Playlist Group cues in the Playlist tab section below.

Start First And Enter Group cues have a blue outline with rounded corners.

You may have observed that this is not at all different from how the same list of cues would behave if there were no Group cue, and you’d be entirely correct. This mode is essentially an organizational tool to visually separate cues into different sections within the cue list, and to hide or show an entire batch of cues with a single click (on the grey triangular disclosure indicator to the left of the Group cue’s name.)

The internal “memory” of a Start Random Group cue is reset each time the workspace is opened. 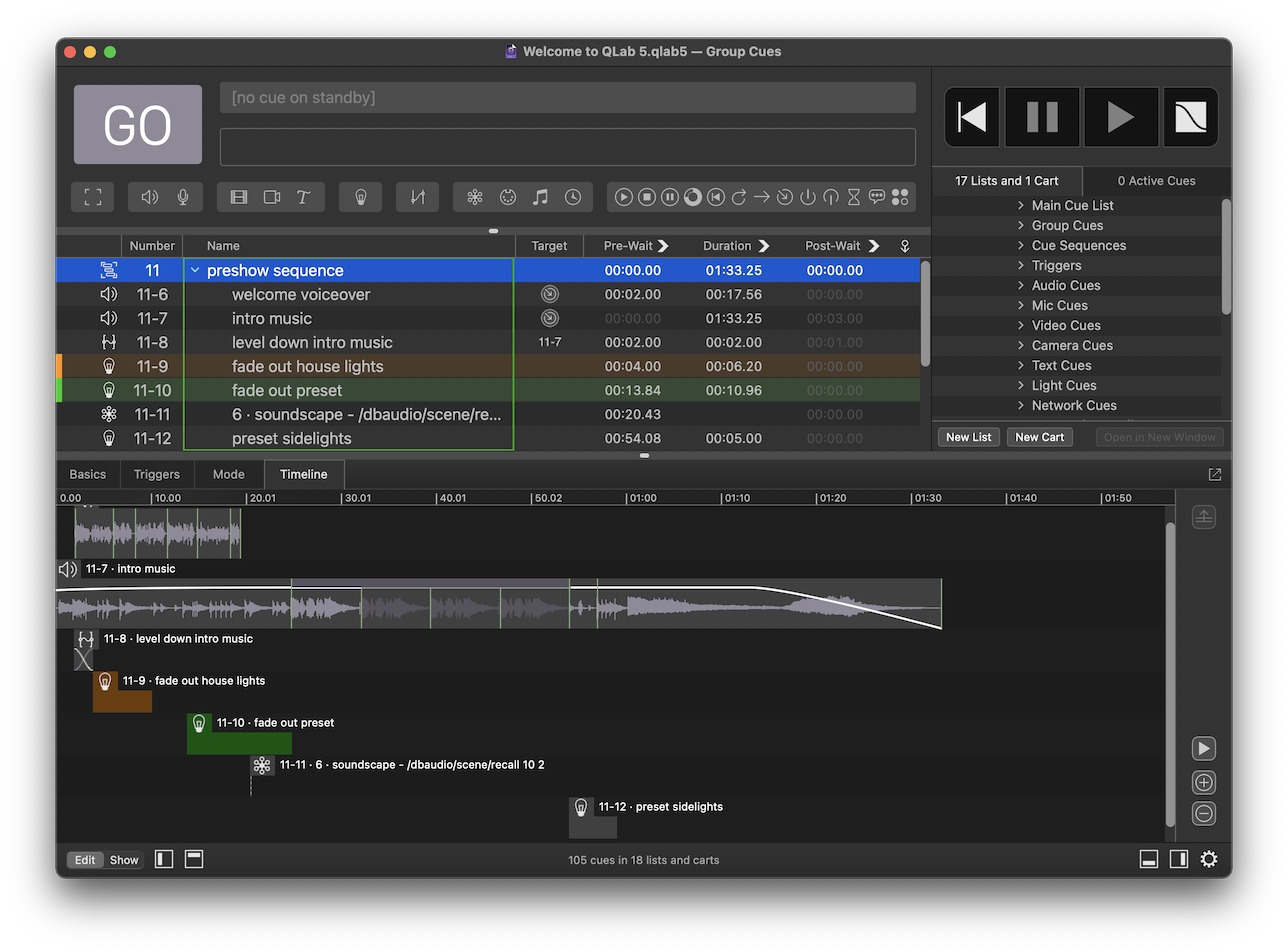 If an Audio cue or Video cue in the Timeline Group cue has slices, those slices are displayed. If a slice repeats a finite number of times, the slice is drawn the appropriate number of times with a grey bar to help make it visually clear which section of the cue is repeating. If a slice repeats infinitely, it’s only drawn once and the grey bar displays an infinity sign (∞). If a slice is set to a count of zero, it is not drawn. Integrated fade curves are also drawn.

Cues can be adjusted in the Timeline tab in several ways:

When the pointer is hovering over a cue, it will turn into a hand. Click and drag left or right to move the cue in the timeline, thus adjusting its pre-wait time. While a cue is being dragged, blue guidelines appear indicating the start and end of all the other cues in the Group, as well as any slices within those cues. The dragged cue will snap to these guidelines in order to make it easy to align cues with each other. If you want to focus on the guidelines belonging to only a single cue, drag over that cue’s “lane.” The guidelines for all other cues will be hidden, and you can then drag left or right as normal. Dragged cues also snap to the current playback time which is indicated by the vertical yellow line. This makes it easy to pause playback at a desired moment, then drag a cue to exactly that moment.

When one or more cues are selected in the timeline, the following keyboard shortcuts are available to nudge those cues forward and backward in the timeline by adding to or subtracting from their pre-waits:

When the pointer is hovering at the beginning or end of a cue which has a duration, it will turn into a bi-directional horizontal arrow. Click and drag left or right on the start of the cue adjust its start time and pre-wait time simultaneously, or on the end of the cue to adjust the end time of the cue. These adjustments necessarily also adjust the duration of the cue.

When the pointer is hovering over an Audio or Video cue, hold down the option key (⌥) to slip the cue, adjusting its start and end time without adjusting its pre-wait time or duration. Note that only cues without slices can be slipped.

When the pointer is hovering over the bottom edge of a cue, it will turn into a bi-directional vertical arrow. Click and drag up or down to scale the display of the cue. This adjustment is purely visual and does not alter the behavior of the cue in any way.

To scale the whole timeline view, instead of just a single cue, you can scroll vertically while holding down the option key (⌥), or use the keyboard shortcuts ⇧⌘- and ⇧⌘=.

On the right side of the timeline view, beneath the pin/unpin button, are three more buttons:

You can also zoom in and out on the timeline by using pinch gestures on a trackpad, by scrolling horizontally while holding down the option key (⌥), or by using the keyboard shortcuts ⌘- and ⌘=.

Timeline Group cues are the easiest way to create a cue sequence in which each cue is timed relative to the beginning of the sequence.

In this screen shot, cue 11 is a Timeline Group cue. When cue 11 starts, that causes cues 11-6 through 11-12 to start as well. Since all the children except 11-7 have pre-waits, those elapse before the main action of those cues begins. The total result is that at the moment of on cue 11, cue 11-7 starts playing the intro music, then two seconds later cue 11-8 causes the intro music to fade down in level, then the welcome voiceover plays after that, and so on.

Children of Playlist Group cues are treated as a discrete set of cues which play one at a time in sequence. Quintessential uses of a Playlist Group cue include pre-show, post-show, and intermission music, still-image slide shows, or sets of MIDI or OSC commands that need to be sent together but not simultaneously. Any type of cue can be placed inside a Playlist Group cue.

The Playlist tab in the inspector allows you to define the behavior of the Playlist Group cue. 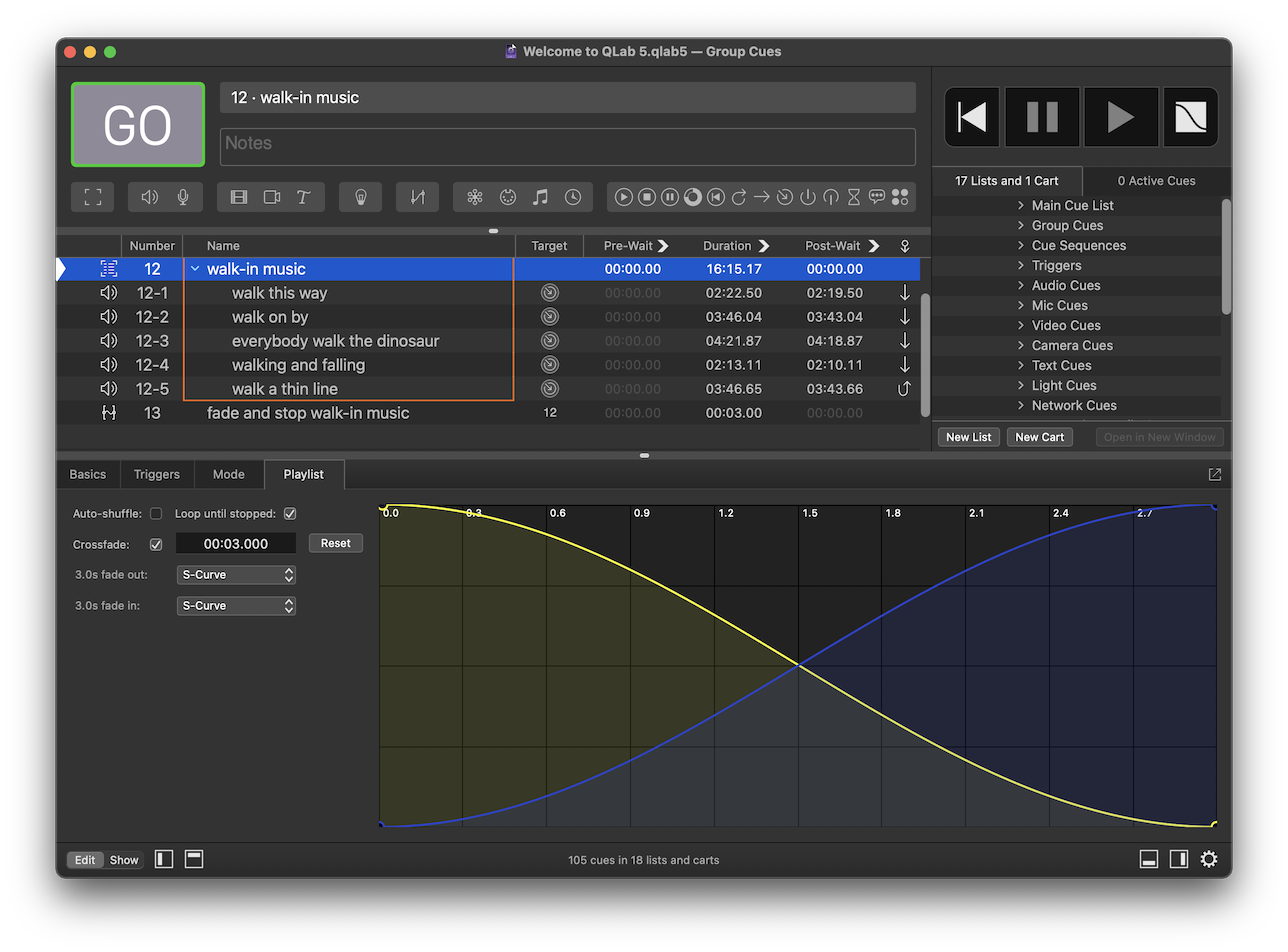 Cues inside a Playlist Group cue are necessarily and automatically set to auto-continue with a non-editable post-wait time equal to their duration.

When this box is checked, the children of the Playlist Group are randomly reordered each time the Group is loaded or started. When the cues are shuffled, their cue numbers and names are displayed in italics to remind you that they are not in their true order. This random order is not saved, and unchecking the auto-shuffle box restores the cues to their true order.

If a Playlist Group cue is set to loop, it must contain at least one cue with a non-zero duration. If it contains only zero-duration cues, the Playlist Group and its children will report as :fig-broken-5: broken. Setting least one child to a duration greater than zero will un-break all the cues.

When this box is checked, QLab will crossfade between cues in the Playlist Group cue. This only applies to cues with audio levels or video geometry; it’s the main audio level and the opacity parameters that are crossfaded. When a Playlist Group cue is set to crossfade, several more controls are enabled and a crossfade curve display appears on the right side of the tab.

The duration of the crossfade can be as long or as short as you like, but any cue in the Playlist Group cue that is shorter than the crossfade duration will break since you cannot crossfade through a cue over more time than the cue lasts.

If the behavior is set to plays previous, a will cause the Playlist Group cue to start the child cue previous to the one that’s currently playing, likewise respecting crossfading and looping settings.

These options are particularly useful when the Playlist Group cue contains cues without indeterminate length, such as an infinitely looping Audio cue, a Video cue targeting a still image, or a Text cue.

Group cues can become broken for the following reasons:

A cue inside the Group is broken

Fix all the broken cues inside the Group to clear this warning.

Auto-continue and auto-follow are not permitted for child cues of Timeline Groups. Set all child cues to do not continue to clear this warning.