The Audio Output Patch Editor, which is available on Macs with an Audio (or Bundle) license installed, allows you to customize the configuration, labeling, and behavior of an audio output patch. This allows you to create complex routing, matrixing, and output processing entirely within QLab.

In the lower left corner of the window is a pop-up menu labeled Set from other patch or defaults… which allows you to copy settings from other audio output patches in the workspace, or reset settings to QLab’s defaults. The menu contains four items, which together make up the entirety of the contents of the three tabs of the Audio Output Patch Editor.

In the lower right corner is a button labeled Done which commits the changes you’ve made, and closes the window. 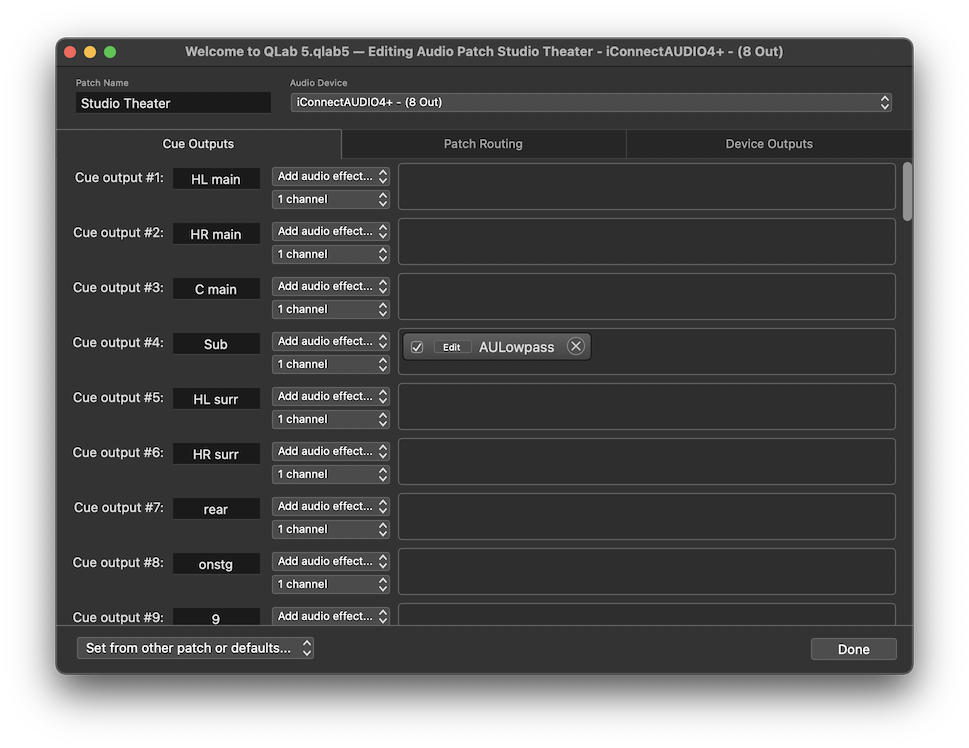 Each row in this tab represents one cue output; cue outputs are the columns in the cue matrix mixer found in the Levels tab of the inspector for Audio, Mic, Video, and Fade cues.

You can rename cue outputs by editing the text field which defaults to the number of the cue output. The text you enter will appear beneath the output sliders in the Levels tab of the inspector. There’s not a lot of space there, so it’s best to use fairly brief names. You can type ⌥return while editing to add a second line of text inside the text field.

To the right of the text fields are two pop-up menus which say Add effect… and 1 channel. The first menu allows you to choose an available AudioUnit effect to insert on the cue output. All AudioUnits installed on the Mac which appear to be compatible with QLab will be listed under the drop-down.

Some AudioUnits, notably Apple’s AUMatrixReverb, only work when they’re supplied with two channels of input, so for this reason the 1 channel menu can be used to group a cue output with the following cue output. This grouping-together is only relevant to AudioUnits on cue outputs, and has no effect anywhere else in QLab.

AudioUnits inserted on cue outputs appear in the area to the right of the pop-up menus. Effects are applied in order, left to right, and the number of effects per output is limited only by the processing power of your computer. 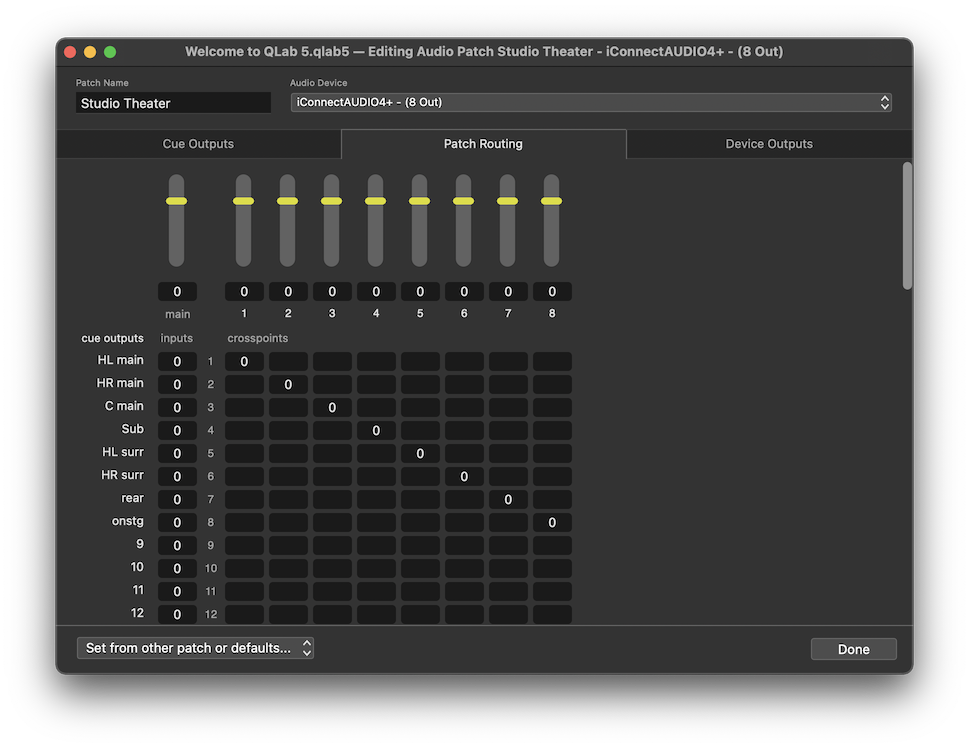 The overall volume of all audio sent through the audio output patch can be adjusted using the main level control in the top left corner of this matrix mixer. 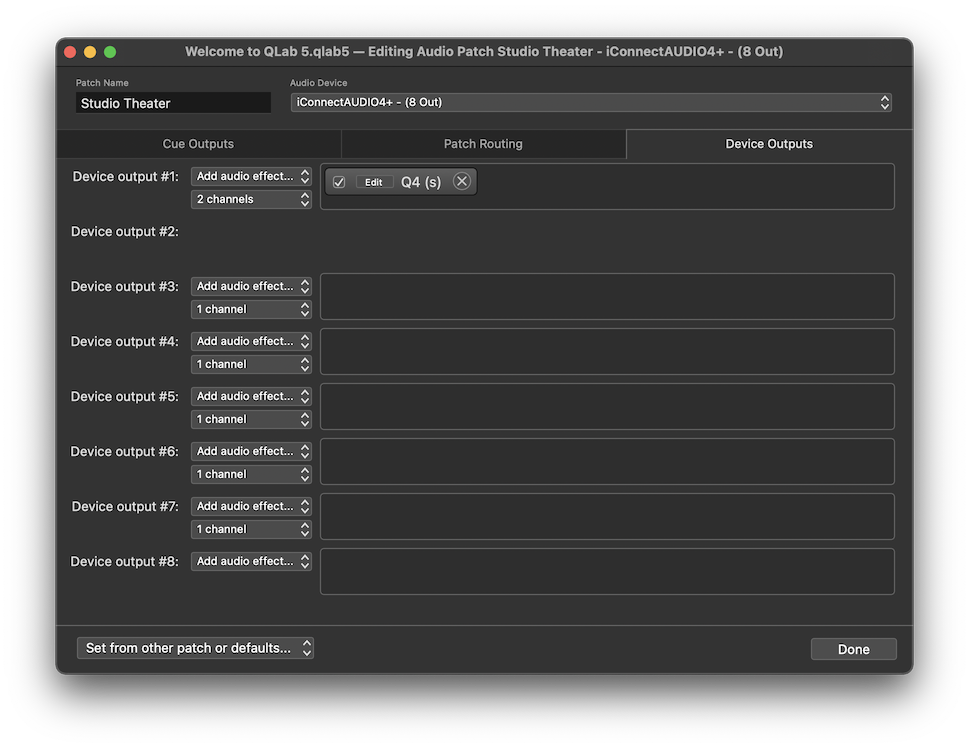 Each row in this tab represents one device output, which are the outputs made available by your audio device.

Device outputs cannot be named in QLab, but other than that the Device Outputs tab works precisely the same way as the Cue Outputs tab.

This illustration demonstrates the signal flow of audio through QLab for a basic Audio cue. 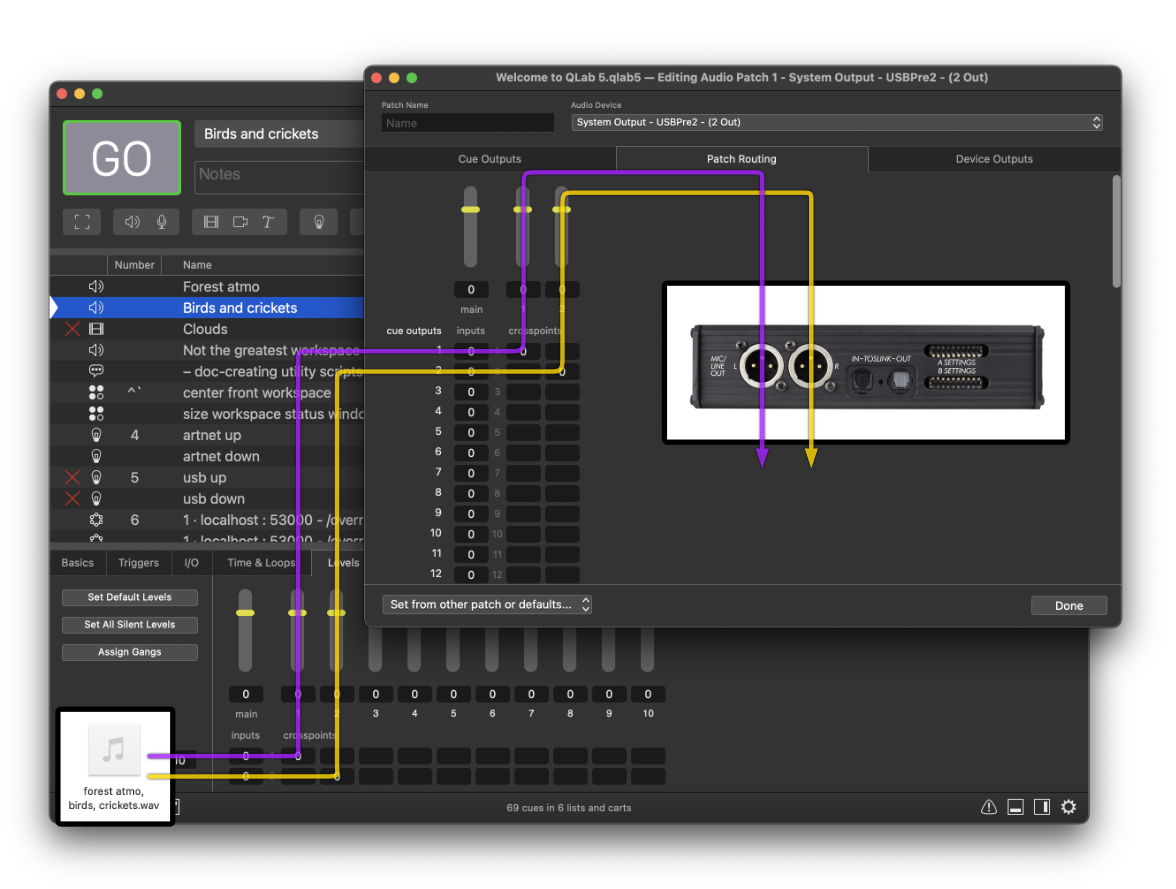 Starting the the Levels tab of the inspector for the cue, the first channel of the target audio file goes from input 1 of the Audio cue, through crosspoint (1,1), and out through cue output 1.

Then, in the Patch Routing tab of the Audio Output Patch editor, the signals sent from cues to cue output 1 are received at input 1, routed through crosspoint (1,1), and out through device output 1.

Device output 1 represents the XLR output on the physical audio device, which can be verified using the Audio MIDI Setup application found in Applications → Utilities.

This routing can, of course, be changed as needed; these are only the default settings.

Audio Output Patches can become broken or warned for the following reasons:

The audio device being used by the audio output patch cannot be seen by QLab, most likely because it’s been turned off or unplugged, or because of some other problem within the device. Reconnect, turn on, or otherwise troubleshoot the audio device assigned to the patch in order to clear this warning.

Audio device has no outputs.