A Fade cue can be used to adjust the opacity, translation, scale, rotation, video effect parameters, volume levels, and audio effect parameters of a targeted Video, Camera, or Text cue. Fade cues can also target Audio cues and Mic cues; when a Fade cue is selected, the inspector will only show the tabs relevant to the type of cue that the Fade cue is targeting.

The word “fade” can often be taken to mean one thing or another, but in QLab “fade” simply means “change a value over time.”

Fade cues require a target and a duration, and must adjust at least one level or parameter.

To learn how to set a target for a Fade cue, please refer to the section on targeting other cues in the Getting Started section of this documentation.

When a Fade cue which targets a Video, Camera, or Text cue is selected, seven tabs appear in the Inspector:

The fade curve, drawn in yellow on the right side of the tab, determines the rate of change of the parameters being faded. The curve on the left is for levels which are increasing, and the curve on the right is for levels which are decreasing. The curve shape that appears by default is set according to the Fade cue’s template, but you can choose another fade shape from the drop-down menu in the top left corner of the tab. 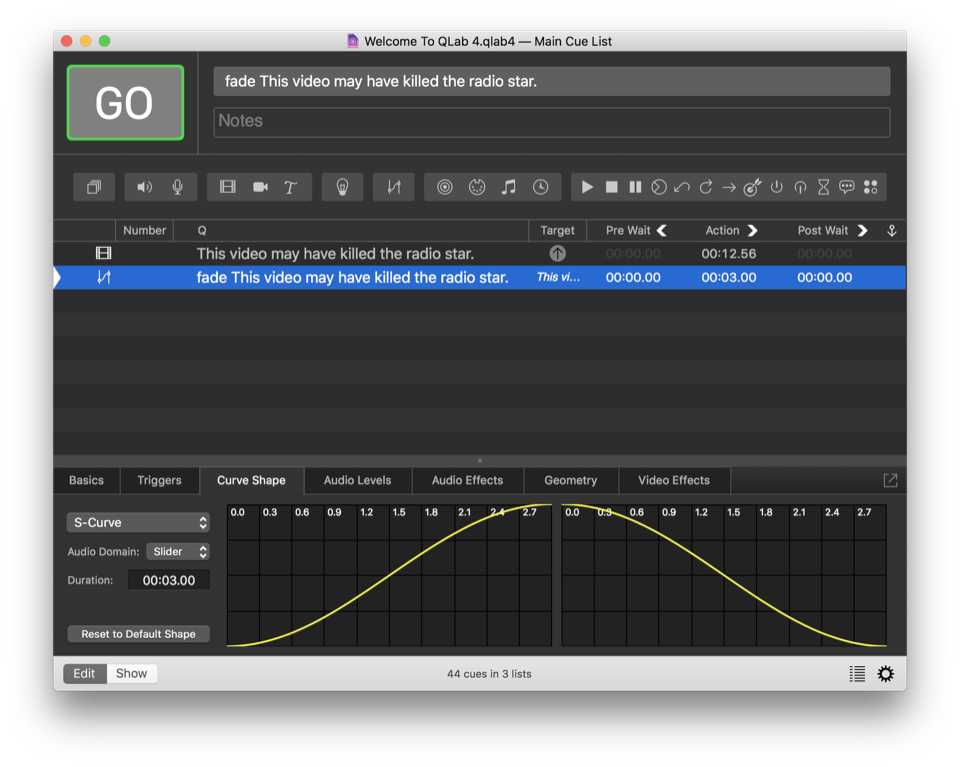 There are four options for Fade curve shapes.

The Audio Domain drop-down menu lets you choose the scale that QLab uses to fade audio levels. This drop-down is only relevant to the Audio Levels tab.

To create an equal power fade, use a parametric curve with audio in the linear domain.

To create an equal gain fade, use a linear curve with audio in the linear domain.

Check or uncheck the Stop target when done box under the Duration text field depending on whether you would like the target cue to continue playing after the Fade cue is complete, or stop once the Fade is complete.

The Audio Levels tab allows you to specify which audio levels you wish to fade, and what their final volume will be. You can specify a different volume for each level.

For Camera cues and Text cues, this tab has no effect.

To learn more about the Audio Levels tab in Fade cues, see the page on Fading Audio in this documentation.

To learn about the Audio Effects tab in Fade cues, see the page on Fading Audio in this documentation.

The Geometry tab allows you to specify which parameters of the Video cue you wish to fade, and what their final value will be. 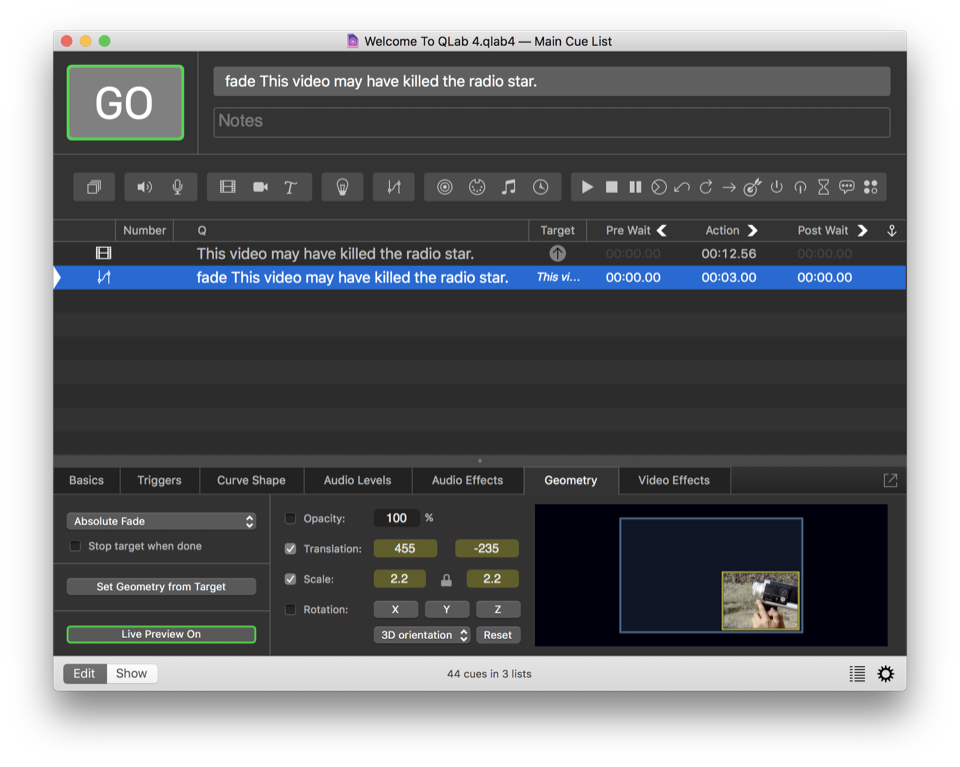 Set Geometry from Target. Clicking this button, or using the keyboard shortcut ⇧⌘T, will invoke the paste cue properties sheet in a special way. First, it will behave as though the target cue was selected and copied, and second it will automatically select the “Video” set of properties to paste. You can choose other properties if you like, but if you simply hit the enter key, QLab will paste the geometry from the target cue onto the Fade cue. This is a convenient way to get started building a Fade, as it will help you keep track of the starting point from which you will be fading.

Opacity. You can fade the opacity of the target cue to any whole-number opacity between 0% and 100%.

Translation. You can move the target cue left to right and up to down by fading translation. Change the position of the video along the X-axis and/or Y-axis by entering values in the text fields or by clicking and dragging the thumbnail image to the desired spot in the preview box.

Scale. You can scale the target cue in both the X and Y axes together, or individually by clicking the padlock icon.

Rotation. Click and drag on each of the X, Y, and Z buttons to fade the rotation of the target cue.

3D orientation. By default, Fade cues use three-dimensional quaternion to rotate their target. This results in smooth, natural movements when rotating along multiple axes, but necessarily means that a fade will never pass through more than 180 degrees of movement in each axis. If you instead want to rotate the target a specific number of degrees about a single axis, you can use this drop-down menu to choose an axis, and then enter the number of degrees you wish to rotate.

Reset. Clicking the Reset button will zero out the rotation values in the Fade cue on all three axes, which means the Fade cue will rotate its target Video cue to the default “front facing” rotation.

When you apply an effect to an Video cue, any Fade cues that target that Video cue will recognize the effect you’ve applied. QLab will list all of the effect’s parameters automatically under the Video Effects tab in the Fade cue.

By default, Fade cues are Absolute. This means that any parameters that you adjust with a Fade cue will arrive at their final levels regardless of their status before the Fade cue runs. If you use a Fade cue to set the scale of a target Video cue to 2, then the scale that Video cue will end up at 2 after running the Fade no matter what the scale was when the Video cue started off. If instead you set the Fade to be relative, then a Fade with a scale of 2 will double the current scale of the target Video cue.

There are a few peculiar things that you need to keep in mind when using relative fades with Video cues.

Fade cues can become broken for the following reasons:

Assign a target to the cue.

No fade parameters have been enabled; pick at least one thing to fade.

One or more audio effects in this cue are missing or broken.

A pro video license is required to fade video geometry.

You’ll need to either install a Pro Video or Pro Bundle license, or adjust the Fade cue to not fade video geometry parameters.

A pro license is required to fade the playback rate.

You’ll need to either install a Pro Audio, Pro Video, or Pro Bundle license, or adjust the Fade cue to not fade rate.

A pro audio license is required to fade audio effects.

You’ll need to either install a Pro Audio, Pro Video, or Pro Bundle license, or adjust the Fade cue to not fade audio effects.