A Fade cue can be used to adjust the volume levels and audio effect parameters of a targeted Audio, Video, or Mic cue. Fade cues can also adjust video parameters of Video cues, Camera cues, and Text cues; when a Fade cue is selected, the inspector will only show the tabs relevant to the type of cue that the Fade cue is targeting.

The word “fade” can often be taken to mean one thing or another, but in QLab “fade” simply means “change a value over time.”

Fade cues require a target and a duration, and must adjust at least one level or parameter.

To learn how to set a target for a Fade cue, please refer to the section on targeting other cues in the Getting Started section of this documentation.

When a Fade cue which targets an Audio or Mic cue is selected, five tabs appear in the Inspector:

The fade curve, drawn in yellow on the right side of the tab, determines the rate of change of the parameters being faded. The curve on the left is for levels which are increasing, and the curve on the right is for levels which are decreasing. The curve shape that appears by default is set according to the Fade cue’s template, but you can choose another fade shape from the drop-down menu in the top left corner of the tab. 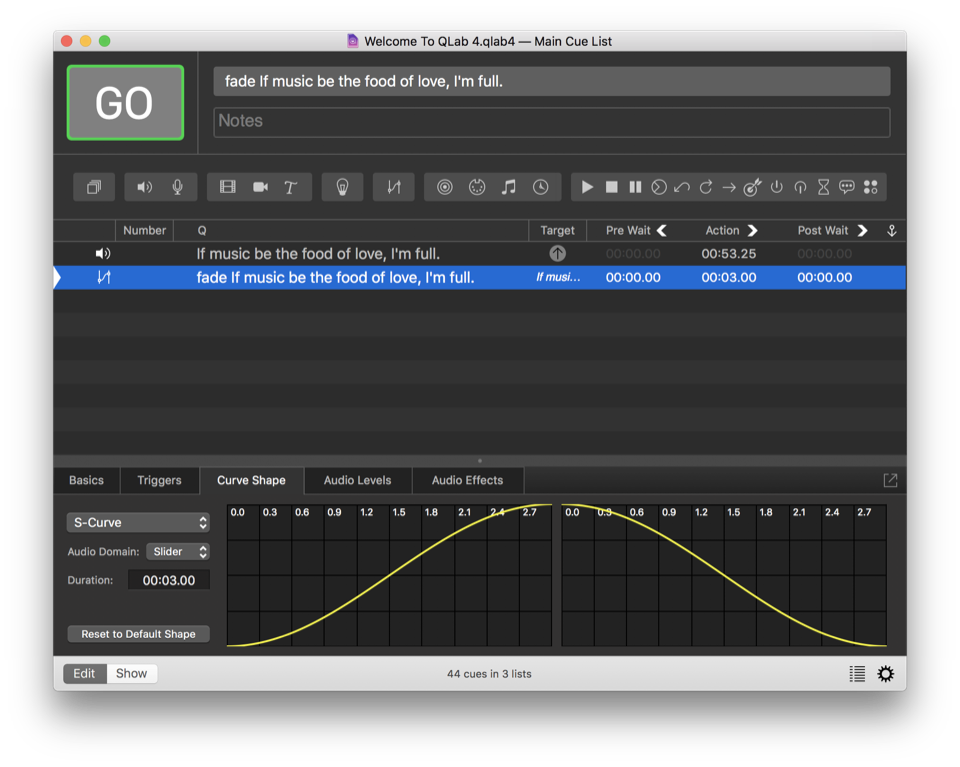 There are four options for Fade curve shapes.

The Audio Domain drop-down menu lets you choose the scale that QLab uses to fade audio levels. This drop-down is only relevant to the Audio Levels tab.

To create an equal power fade, use a parametric curve with audio in the linear domain.

To create an equal gain fade, use a linear curve with audio in the linear domain.

The Audio Levels tab allows you to specify which audio levels you wish to fade, and what their final volume will be. You can specify a different volume for each level, and one Fade cue can fade as many different levels as you like. 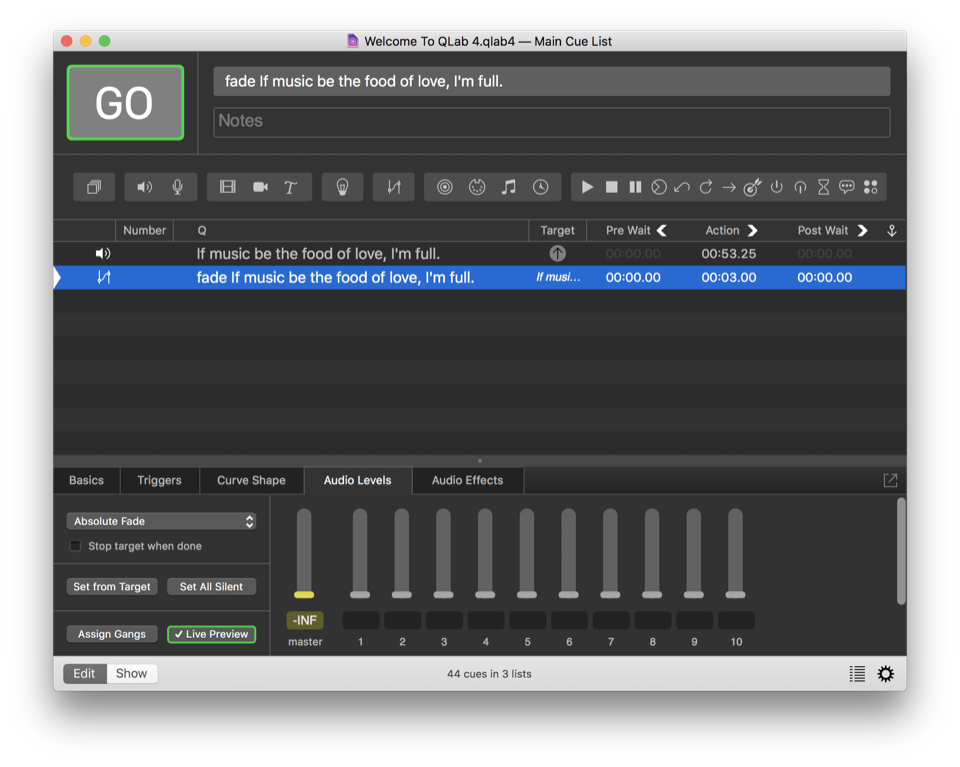 Absolute Fade. This drop-down menu lets you choose between an absolute fade, which is QLab’s default, and a relative fade. Relative fades are discussed in detail below.

Stop Target When Done. Check or uncheck this box depending on whether you would like the target cue to continue playing after the Fade cue is complete, or stop once the Fade is complete.

Set from Target. Clicking this button, or using the keyboard shortcut ⇧⌘T, will invoke the paste cue properties sheet in a special way. First, it will behave as though the target cue was selected and copied, and second it will automatically select the “Audio” set of properties to paste. You can choose other properties if you like, but if you simply hit the enter key, QLab will paste the levels from the target cue onto the Fade cue. This is a convenient way to get started building a Fade, as it will help you keep track of the starting point from which you will be fading.

Set All Silent. Clicking this button will return the fade to a pristine state.

Assign Gangs. This button behaves the same way as it does in an Audio cue.

The right side of the Levels tab is a matrix mixer which shows the same number of input rows as the Fade’s target cue. Adjusting any level in the matrix mixer will turn it yellow, which means that level is “active.” When the Fade cue is run, any active levels will be faded. Inactive (grey) levels will remain untouched. You can activate or deactivate a level by clicking on it.

Audio levels are specified in decibels (dBFS). The default range of volumes in QLab is +12 dB to -60 dB. The lower volume limit is regarded as silent, and displayed as -INF. You can change the volume limits if your workspace in Workspace Settings

In addition to adjusting audio levels, Fade cues can be used to adjust any audio effects on their target cue. When you apply an effect to an Audio cue, any Fade cues that target that Audio cue will automatically recognize the effects you’ve applied, and they will be listed in the Audio Effects tab of the inspector for the Fade cue. By default, the checkbox next to an effect will be unchecked, meaning that the Fade cue will not adjust parameters of that effect. To control an effect with the Fade cue, just check the box next to the effect.

Unlike fading audio levels, there is no way to activate or deactivate individual parameters of an audio effect in a fade. You can only fade the entire audio effect from one “state” to another. Thus, to avoid accidentally adjusting more parameters than you intend, you can click Set Audio Effects from Target to copy the state of the audio effect and paste it into the Fade cue. Otherwise, the levels in the Fade cue will default to the built-in default state for that audio effect.

Once you’ve done that, or elected not to, you can click the Edit button for the effect to adjust the effect.

It’s important to understand that when you click Edit to view the effect, you’re not opening the same window as when you click Edit in the Audio cue. The title bar of the effect window will show the cue name and number of the cue it belongs to, but nevertheless it can be difficult to keep track of which edit window you’re looking at. Take your time and be sure that you’re making changes in the place you intend.

With the effect editor window open, you can make any adjustments you wish to the effect. This is a situation in which Live fade preview can be very helpful. It’s turned on by default, but if you’ve turned it off, consider turning it back on when adjusting audio effects in a Fade cue. That way, you can make adjustments in the Fade cue while the target Audio cue is running, so that you can hear those adjustments in real time.

While AudioUnits can also be placed on Cue Outputs and on Device Outputs, Fade cues cannot adjust those effects. To learn more about effects on outputs, refer to the section of the documentation on the Audio Patch Editor.

The Audio Effects tab of the inspector also lets you fade the playback rate of the target cue. You can check the box labeled Fade rate to, and set a target rate. The maximum playback rate in QLab is 33, and the minimum is 0.03.

Please note that to fade the rate of a Video cue, that Video cue’s target media must have an audio track.

However, using the drop-down menu at the top left corner of the Levels tab, you can set a Fade cue to be a relative fade. Relative fades add or subtract a given amount to the active parameters, so the starting point of those parameters very much matters. 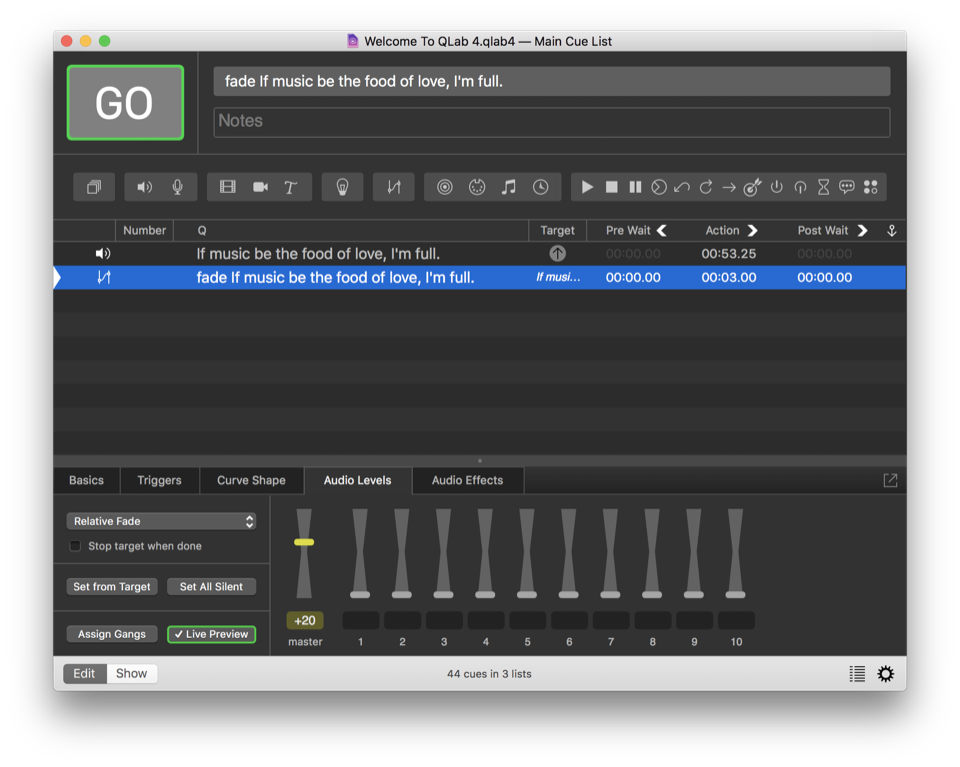 To help protect you against this, QLab has a maximum level, which is set in the Audio section of Workspace Settings. By default, this is +12, meaning that in the example above, the Audio cue would end up at +12, not +30. Depending on the gain structure of your sound system, though, this may still be uncomfortably loud.

Using a mixture of absolute and relative fades on the same target cue can have unpredictable results due to the different ways that they operate. If you do use a mix of fade types, be sure to test your cues and cue sequences thoroughly.

While fading in, fading out, and adjusting the overall volume of an Audio cue are probably the most common uses of a Fade cue, you can also use a Fade cue to pan an Audio cue amongst any pair or group of outputs.

The best way to understand this is to walk through a simple example. Let’s say you have an Audio cue that targets a mono track, and you want to pan it from one speaker to another. QLab will recognize the track has one channel, and one row will appear in the Audio Levels tab of the inspector for that Audio cue. In the Audio cue, set the level for the first speaker (cue output 1, the first column of the matrix) to 0, and set the level for the second speaker (cue output 2, the second column of the matrix) to -INF. (Note that QLab treats a blank field in this matrix as -INF.)

Remember too that one Fade cue can affect as many controls as you wish. If you have a track with eight channels instead of just one, and you have ten speakers instead of two, you can enter values in the matrix or adjust the sliders to have different channels come up or down in different outputs.

QLab has a sort of special-case undo command that applies only to Fade cues, called Revert Fade Action. You can find this command under the Tools menu when a Fade cue is selected, or you can use the keyboard shortcut ⇧⌘R.

When Revert Fade Action is invoked on a Fade cue after that Fade cue has been run, QLab reverts the levels of the target of the selected Fade cue to whatever they were before the Fade ran except for levels which have been otherwise changed. That is to say, the only adjustments that are reverted are the ones that the selected Fade cue caused.

Fade cues can become broken for the following reasons:

Assign a target to the cue.

No fade parameters have been enabled; pick at least one thing to fade.

One or more audio effects in this cue are missing or broken.

A pro video license is required to fade video geometry.

You’ll need to either install a Pro Video or Pro Bundle license, or adjust the Fade cue to not fade video geometry parameters.

A pro license is required to fade the playback rate.

You’ll need to either install a Pro Audio, Pro Video, or Pro Bundle license, or adjust the Fade cue to not fade rate.

A pro audio license is required to fade audio effects.

You’ll need to either install a Pro Audio, Pro Video, or Pro Bundle license, or adjust the Fade cue to not fade audio effects.