Introduction to Audio in QLab

What Is A Matrix Mixer

A matrix mixer is made up of inputs and outputs, just like any mixer, that can be thought of as a grid of rows and columns. The rows represent inputs to the mixer, and the columns represent outputs from the mixer. The point at which each row intersects with each column is referred to as a crosspoint. If you imagine that each crosspoint is actually a volume knob which allows you to set the level of the input as it flows into the output, like an auxiliary send knob, then what you have is a matrix mixer. What makes it a matrix mixer is that every input can route into every output with just such a volume knob. There are no “main” outputs, no fixed-send busses, and no limitations on which inputs can go to which outputs. 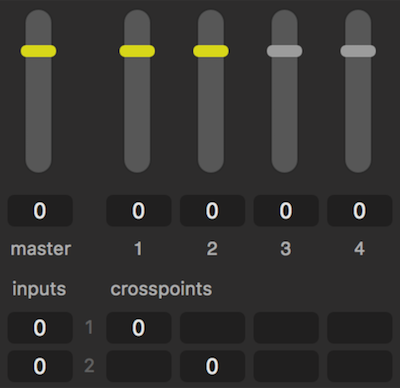 In QLab, every cue that can deal with audio (that’s the Audio cue, the Mic cue, the Video cue, and the Fade cue) has its own matrix mixer in which the rows represent either channels in the audio file, channels of audio embedded in a video file, or live inputs on an audio device. The columns represent cue outputs, which are like busses on a mixer.

The left-most cell of each row, labeled inputs, is the level control for that input.

The top-most cell of each column, which is accompanied by a vertical slider control, is the level control for that cue output.

The top-left cell of the matrix, labeled master and accompanied by a vertical slider control, is the master output level of the entire cue.

The grid of cells within the matrix, labeled crosspoints, are the crosspoint level controls for each input/output connection.

Cue outputs do not connect directly to the headphone jack or plugs on your audio interface. Instead, they use one of eight output patches, which are eight more individual matrix mixers that bridge the connection from cue output to actual physical outputs.

Each Audio, Mic, or Video cue can be assigned to one Audio Patch, and each Audio Patch contains a matrix mixer in which incoming audio from the cues’ cue outputs are the rows, and actual outputs of the assigned audio device are the columns. By default, these are routed on a one-to-one basis; cue output 1 routes to device output 1, cue output 2 to device output 2, and so on. If you have a Pro Audio or Pro Bundle license, you can adjust the routing to suit your needs by clicking the Edit Patch buttons.

The World Beyond QLab

In the most technical sense, what QLab knows as the device outputs are not necessarily the actual outputs of the audio device. Device manufacturers are responsible for creating the software drivers for their devices, which tell the Mac about the outputs and other capabilities of the hardware. The Mac, in turn, tells QLab. So, the device might have its own internal routing or other special features which could make for a discrepancy between what QLab sees and what’s really there. By and large, any devices we’ve seen that do things like this are well designed and documented, so all that’s needed to get the full picture is to read the manual for your audio interface and make sure you understand what’s what.

The simplest example of this is the headphone jack on your Mac, which has volume controls on the keyboard and in the menu bar. These volume controls come “after” QLab, and therefore behave as an ultimate arbiter of the overall output volume. Other audio interfaces use other software controls, but the principle is the same.