The Patch Editor allows you to edit the routing of Cue Outputs to Device Outputs, and to add AudioUnit effects to either.

The field at the top of the Patch Editor lets you change the name by which QLab identifies the audio device. Changing the name is purely for convenience, and has no effect outside of QLab.

You can rename cue outputs from their default numbers to any text you wish. The changed names will be reflected in the Device & Levels tab of the inspector. 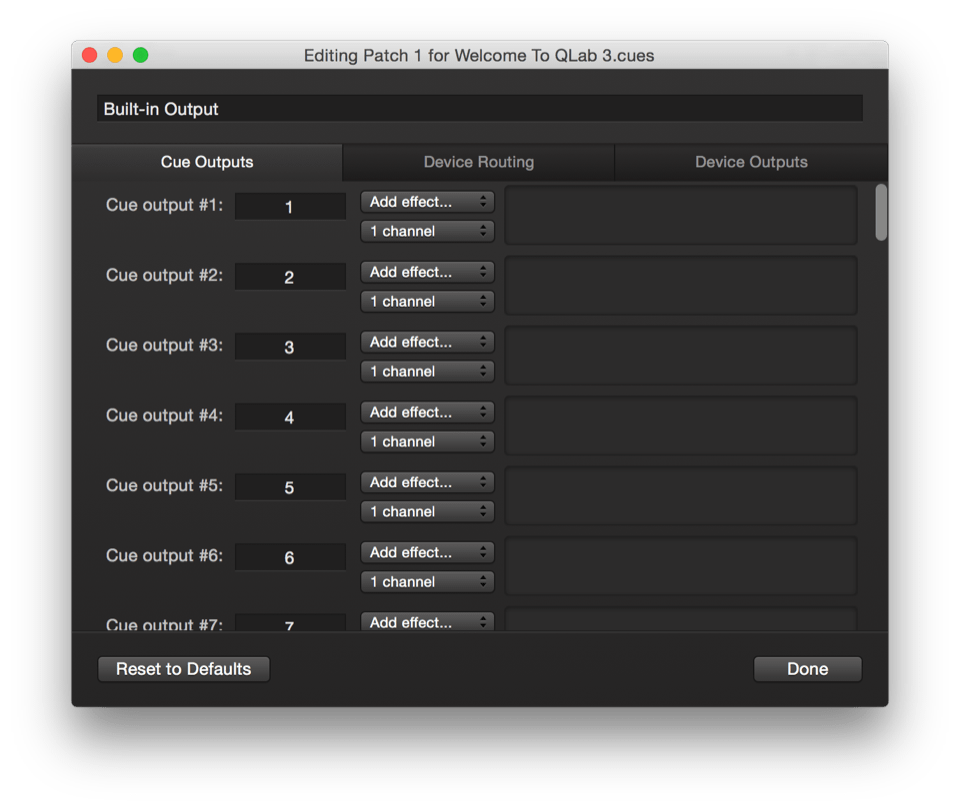 The Add effect… dropdown menu will show you a list of all 64-bit compatible AudioUnits installed on the Mac, and by choosing from this list you can apply an AudioUnit to the cue output, much like applying an effect to an aux send on a console or in a DAW. Some AudioUnits (for example, Apple’s AUMatrixReverb) require stereo input, and so you can use the 1 channel dropdown menu to link a cue output to the following cue output, and use them as a stereo pair for the purposes of driving stereo effects. 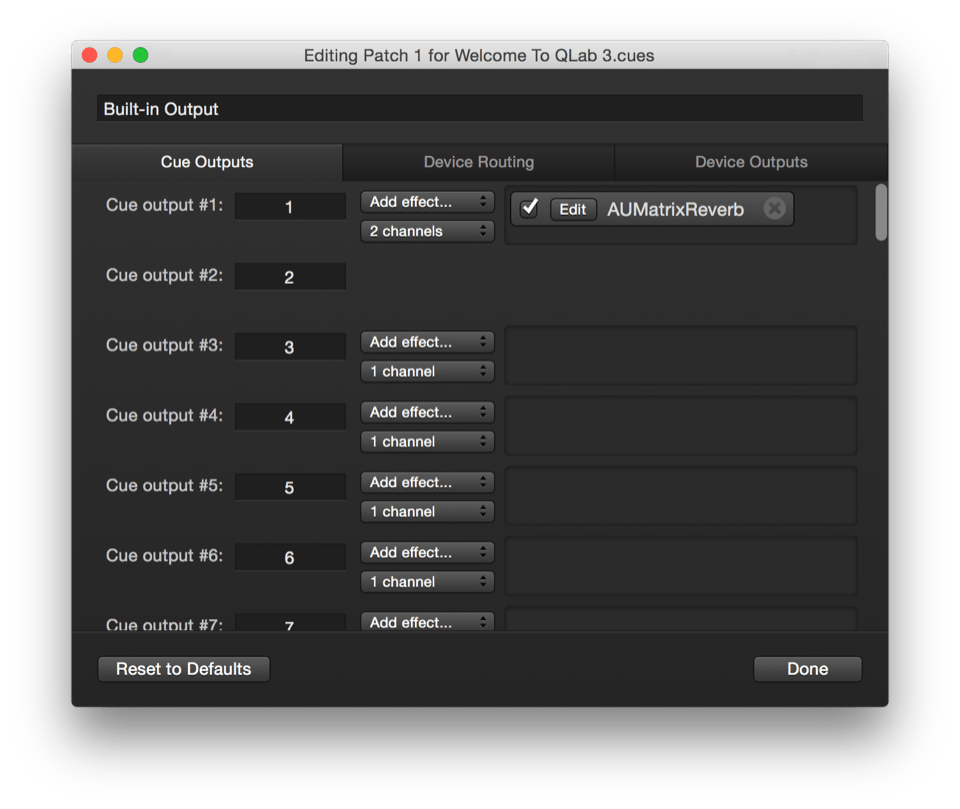 You can insert multiple AudioUnits on each cue output, and drag them left to right to set the order in which they are inserted.

It’s important to note that running AudioUnits is much more processing intensive than just playing straight audio. It’s not difficult to bring even a powerful Mac to its knees by loading up a bunch of effects, particularly more complex ones such as convolution reverbs. 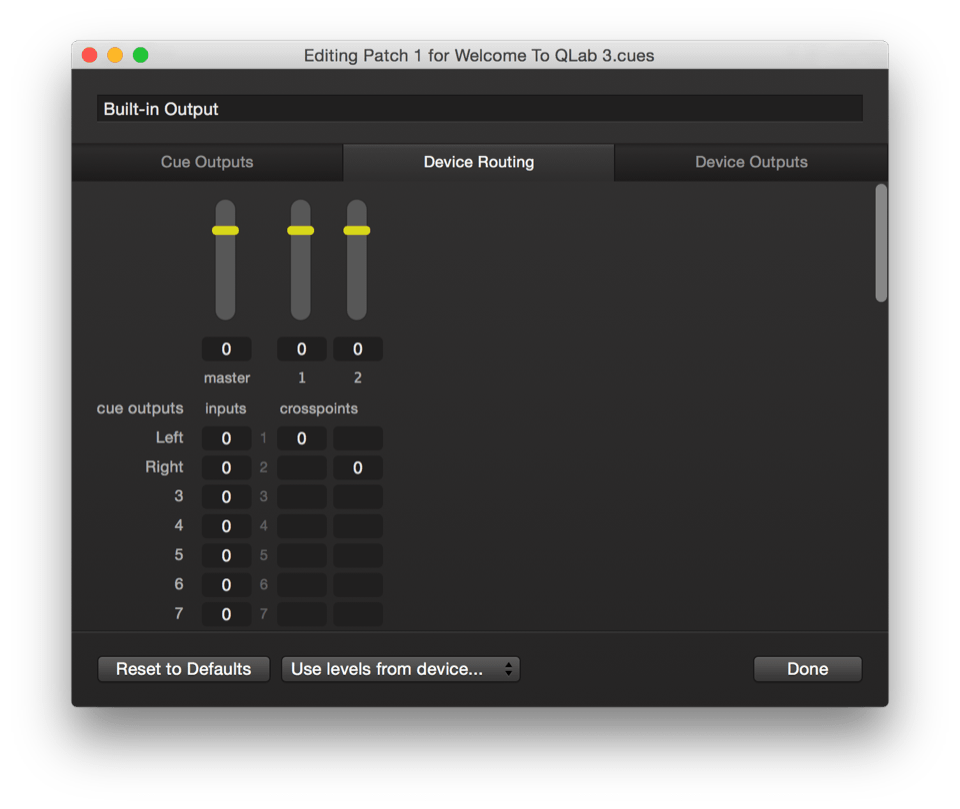 The Reset to Defaults button at the bottom restores the matrix to its default position.

The Use levels from device… button shows a list of any audio devices that have ever been attached to this workspace, and selecting one attempts to set the current routing to match that of the device when it was last connected.

Here, you can add AudioUnit effects to the very end of the signal path within QLab. Just like with cue outputs, you can connect device outputs into pairs in order to drive stereo-only AudioUnits. 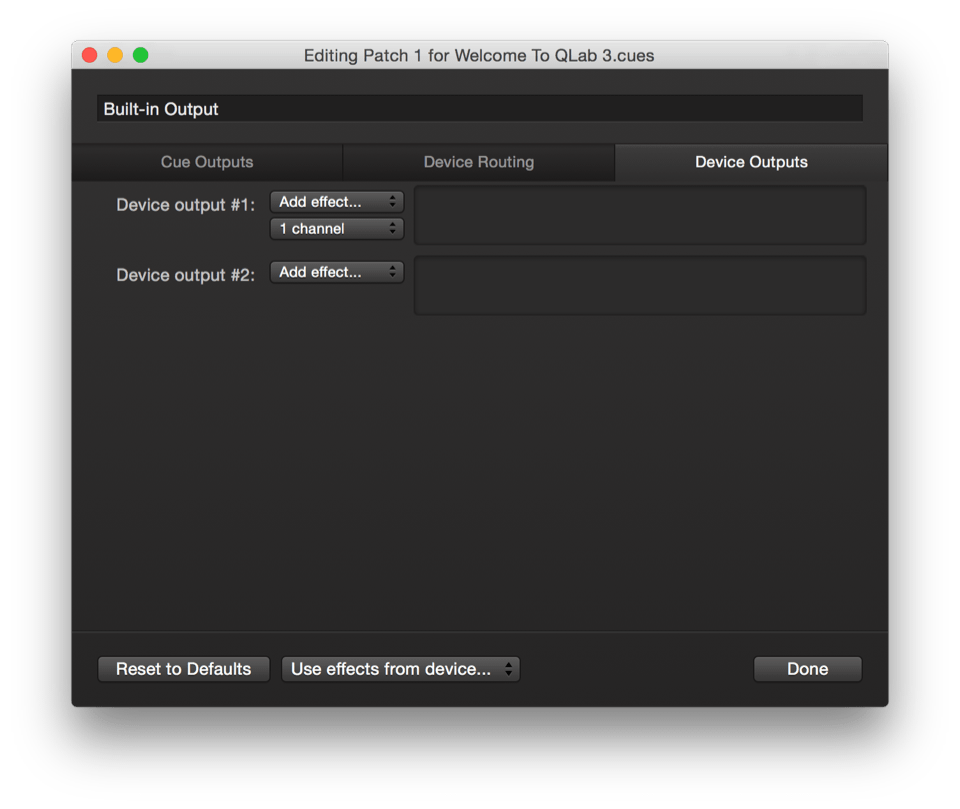 The Use effects from device… button shows a list of any audio devices that have ever been attached to this workspace, and selecting one attempts to duplicate the arrangement of AudioUnits used with that device when it was last connected.

Audio travels through QLab in this order: